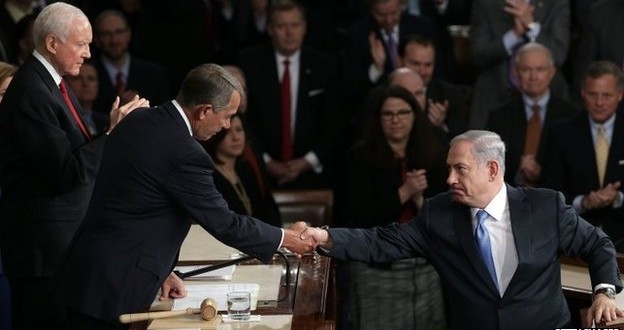 Benjamin Netanyahu addressed Congress at the invitation of John Boehner

Republicans have been highly critical of President Barack Obama over the deteriorating relationship with Israel.

During the campaign, Mr Netanyahu vowed not to allow the establishment of a Palestinian state, angering the White House.

Mr Netanyahu has since tempered those remarks, but the White House still warned there would be “consequences”.

President Obama called Mr Netanyahu on Thursday to congratulate him on his election victory, but warned him that the US was reassessing its approach to Israeli-Palestinian peace in the wake of Mr Netanyahu’s comments.

Mr Boehner’s visit will take place at some point during a two-week congressional recess that begins on 30 March, according to Kevin Smith, a spokesman for Mr Boehner.

“He looks forward to visiting the country, discussing our shared priorities for peace and security in the region, and further strengthening the bond between the United States and Israel,” Mr Smith said.

The visit will take place during the next congressional recess

The Israeli newspaper Haaretz said the visit would include several congressional Republicans.

Mr Smith declined to comment on specifics of the trip.

In January, Mr Boehner invited the Israeli leader to address a joint session of Congress without notifying the White House.

Mr Netanyahu used the speech on 3 March, two weeks before the Israeli elections, to warn the US against reaching a “bad deal” in talks with Iran on its nuclear programme.

Many Democrats chose not to attend the speech, and Mr Obama refused to meet with Mr Netanyahu.

Senior Republican aides have told the BBC that Mr Boehner’s visit to Israel was planned “not only before the Israeli election, but long before the prime minister’s speech to Congress”.