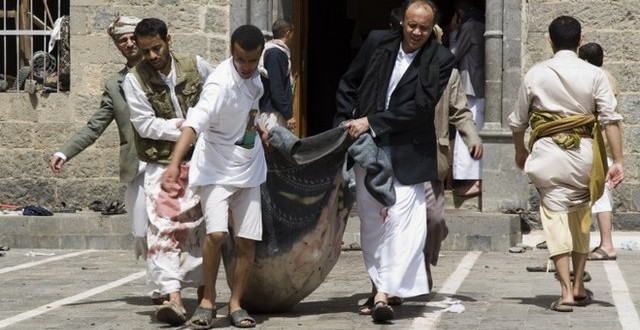 “In a country wracked by violence this feels like a new low”, reports BBC’s Paul Adams

Islamic State (IS) say its militants carried out suicide bombings on two mosques in the Yemeni capital, Sanaa, which killed at least 137 people.

The attacks are the first claimed by IS – a Sunni group – since it set up a branch in Yemen in November.

Both mosques were used mainly by supporters of the Zaidi Shia-led Houthi rebel movement, which controls Sanaa.

Yemen has suffered from political instability for years and Houthi rebels control nine of the 21 provinces.

The government of internationally recognised President Abed Rabbo Mansour Hadi has fled to the southern port city of Aden.

Four suicide bombers attacked the Badr mosque, in the south of Sanaa, and the al-Hashoosh mosque, in the north of the capital, as worshippers gathered for Friday prayers.

At the Badr mosque, one bomber entered the building and detonated his explosives while other people were caught by the second bomber near the main gates.

Prominent Houthi cleric Al-Murtada bin Zayd al-Mahatwari, the imam of the Badr mosque, was among those killed, local media reported.

Two more bombers attacked the al-Hashoosh mosque, with one detonating explosives near the entrance and the other running into the mosque itself.

“Blood was running like a river,” said survivor Mohammed al-Ansi.

Both mosques were packed for Friday prayers when the bombers struck

Hospitals in Sanaa were overwhelmed with the number of casualties

About 300 people were wounded, medics said, and hospitals appealed for blood donors.

There was another suicide attack on a mosque in the northern city of Saada – a Houthi stronghold – reports said, but only the attacker was killed.

Both al-Qaeda and IS consider Shia Muslims to be heretics and have rallied against Houthis in Yemen.

“Let the polytheist Houthis know that the soldiers of the Islamic State will not rest until we have uprooted them,” the statement said.

The White House “strongly condemned” the attacks, but said it could not confirm that those behind them were affiliated with IS.

Spokesman Josh Earnest said IS could be falsely claiming responsibility.

“It does appear that these kinds of claims are often made for a perception that it benefits their propaganda efforts,” he told reporters.

Yemen is the base of al-Qaeda in the Arabian Peninsula (AQAP), a powerful offshoot of the jihadist militant group that has carried out similar suicide attacks on Houthi supporters.

AQAP denied carrying out Friday’s bombings, citing instructions from its leader Ayman al-Zawahri not to target mosques or markets.

Meanwhile, deadly clashes erupted in Aden on Thursday between forces loyal to President Hadi and those supporting his predecessor, Ali Abdullah Saleh.

Aden has been President Hadi’s base since he fled Sanaa last month after being placed under effective house arrest by Houthi rebels when they took control of the capital in January.

On Friday, warplanes targeted the presidential palace in Aden for a second day but Mr Hadi’s aides said he was unharmed. Officials said the planes were flown by pilots allied to the Houthis and Mr Saleh.

There were also reports on Friday that al-Qaeda fighters had taken control of the southern city of al-Houta. They reportedly took over barracks and government buildings, killing several security officers in the process.

Mr Saleh was forced to hand over power to Mr Hadi in 2011 after mass protests, but has remained a power-broker. He is currently allied with the Houthis, against whom he fought wars when he was president.