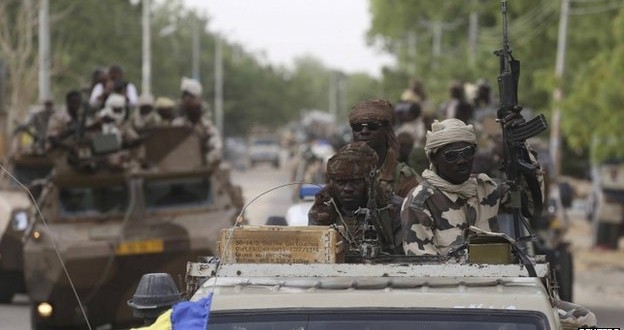 Chadian and Niger troops liberated Damasak, which is near the border with Niger, on Saturday

At least 70 bodies have been found dumped outside the town of Damasak in north-eastern Nigeria, after it was recaptured from Boko Haram militants.

The victims appear to have been killed some time ago, as the bodies were partially mummified by the desert air.

Troops from Niger and Chad seized Damasak on Saturday, ending months of control by the Islamist militants.

“They are getting weaker and weaker by the day,” he told the BBC on Friday.

President Goodluck Jonathan: “I’m very hopeful that it will not take us more than a month to recover the old territories”

Damasak is a trading town in Borno state near Niger’s border and is about 200km (120 miles) from the state’s main city of Maiduguri.

It was overrun by the militants, who began their insurgency in 2009 to create an Islamic state, at the end of last year.

Many of those found in Damasak had had their throats slits and some had been decapitated. It is not yet known who the victims were.

Chadian army Col Azem Bermandoa Agouna told AFP news agency that he had seen “about 100 bodies spread under a bridge just outside the town”.

Together with the Nigerian army, forces from Chad, Niger and Cameroon are involved in an offensive against the Islamist insurgents who began taking over territory about a year ago – after being pushed out of their base in Maiduguri.

Nigeria is preparing to hold presidential elections on 28 March after security concerns led to a postponement of the original date in mid-February.

President Jonathan’s government has been heavily criticised for its failure to end the six-year insurgency in the north-east.

He admitted that the government has been surprised by the group’s progress.

“We never expected that [Boko Haram] will build up that kind of capacity. We under-rated their external influence. Since after the civil war we’ve not fought any war, we don’t manufacture weapons, so we had to look for help to re-equip our army and the air force,” he told the BBC.

The government has made similar claims in the past about defeating or driving back Boko Haram within a specific period – but these have not been borne out by events.

Boko Haram promotes a version of Islam which makes it “haram”, or forbidden, for Muslims to take part in any political or social activity associated with Western society.

Earlier this month, the group pledged allegiance to Islamic State militants, who control large parts of Syria and Iraq and are also active in Libya.

The violence in north-eastern Nigeria has killed more than 15,500 people since 2012.