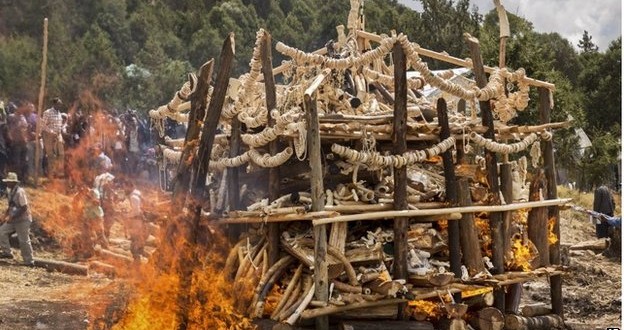 Ethiopia has destroyed its entire stockpile of illegally poached ivory in an effort to curb poaching.

The six tonnes of tusks, carvings and jewellery were burned in the capital Addis Ababa.

It is the second African country – after Kenya – to burn its ivory stockpile to discourage the black market trading.

Ethiopia has lost more than 90% of its elephants since the 1980s. Conservationists welcomed the move.

Police and park officers poured petrol on the stockpile at a ceremony on a hill in the middle of the capital’s Gulele Botanic Garden.

It was lit by Deputy Prime Minister Demeke Mekonnen.

Mr Mekonnen described the symbolic gesture as “a vital stepping stone” in the implementation of more stringent laws against poaching.

The authorities say that in the last five years, they have arrested more than 700 suspected poachers and traffickers.

Conservationists say, poaching has surged across sub-Saharan Africa in the past few years, with gangs killing elephants and rhinos for their tusks and horns to feed the ever-increasing demand from Asia.

Last month, China imposed a one-year ban on the import of ivory.

Between 2011 and 2014, conservationists say 42 elephants have been killed, with three more cases registered since January this year.

Dawud Mume Ali of the Ethiopian Wildlife Conservation Authority told Reuters news agency that 492 foreign nationals – from West Africa, Southeast Asia and the Far East – were either put in prison or fined during those three years.

Last year, the leaders of Botswana, Gabon, Chad and Tanzania pledged to honour a 10-year moratorium on the sale of ivory.