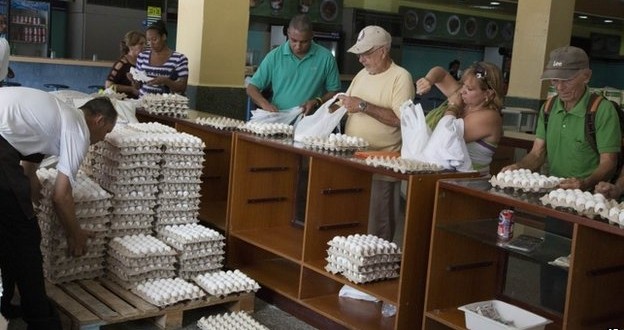 Most Cubans buy their food from state-owned shops

A court in Cuba has jailed 18 government officials for between five and 15 years for stealing more than eight million eggs and selling them on the black market.

The Cuban authorities said one man was acquitted for lack of evidence.

Six other people have been ordered to pay back the money stolen.

He declared at the time that corruption was a cancer in the communist-run country.

The “criminal network” succeeded “thanks to unobservant and/or corrupt supervisors, deficient or absent monitoring mechanisms and complicit or tolerant attitudes”, said Granma last week, when news of the scam was first published.

The Cuban authorities said the scheme operated between January and October 2012.

Last month Cuba freed the president of a Canadian transport company after more than three years in jail.

Cy Tokmakjian was arrested in 2011 as part of an anti-corruption operation and sentenced to 15 years imprisonment on bribery charges.

Cuba is in talks with the United States to restore relations severed more than five decades ago.

Analysts expect that the thaw in relations will transform Cuba’s agricultural sector, which will benefit from modern machinery and the proximity with the US.