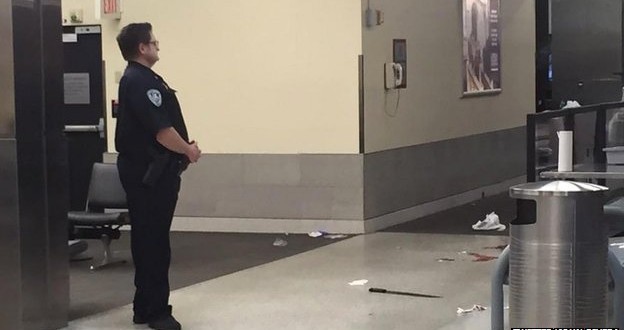 Police shoot attacker at US airport

US security staff shot a knife-wielding man three times at New Orleans international airport after he tried to storm a checkpoint, officials say.

They say the man, named as Richard White, 62, attacked an airport security worker with wasp spray before striking another on the arm with a large knife.

Police said he was “unresponsive” after being shot in the leg, chest and face but was taken to a local hospital.

Several bystanders were said to have been treated for minor injuries.

Jefferson Parish Sheriff Newell Normand told reporters it was unclear whether White was at the airport as a traveller. “We’re still piecing together witness interviews,” he said.

He said White, a taxi driver, had “little or no criminal history”. He was alive and in surgery, Sheriff Normand added.

Those making their way to and from flights in the busy terminal reported chaotic scenes as the incident unfolded.

Jeremy Didier, who had just arrived on a flight from Florida, said he saw a man “jumping over people” in the queue at the boarding pass checkpoint.

Two gunshots rang out and “everyone hit the floor,” he told The Times-Picayune, a New Orleans newspaper.

Farah Stockman, a journalist for the Boston Globe who was in the airport at the time, tweeted: “Just witnessed [the] craziest thing.”

“People had heard gunshots. Everyone was hiding behind chairs and in doorways. Make our way to exit. Body was lying in a pool of blood.”

Authorities said the area where the attack took place would be closed off until Saturday but confirmed that rest of the airport remained open.