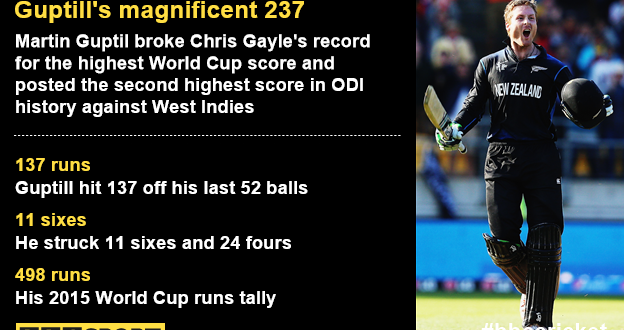 New Zealand’s Martin Guptill made the highest score in World Cup history by smashing 237 not out against West Indies in Wellington.

the 215 made by West Indies’ Chris Gayle

earlier in the tournament.

Rohit Sharma’s 264 is the only higher score in one-day internationals.

Guptill, who made a century in his last innings against Bangladesh, became the fifth man to make an ODI double hundred, joining Indians Sharma, Sachin Tendulkar and Virender Sehwag, as well as Gayle.

His effort is also the fourth highest score in all List A cricket – limited-overs games that are not Twenty20s.

Opener Guptill, who was dropped on four by Marlon Samuels, already held the record for the best ODI score by a New Zealander, having made an unbeaten 189 against England in 2013.

But this effort, played out in front of a raucous Wellington crowd in a home quarter-final, ensured his place in World Cup and New Zealand cricket history.

The right-hander, who began by driving the first ball of the innings for four, heaved six after six over the leg side boundary after reaching his century.

The 10th of his sixes went out of the ground and landed on the roof of the “Cake Tin” stadium.

Guptill, who made his second hundred from only 41 balls, beat the previous best World Cup knockout score of 149 made by Australia’s Adam Gilchrist.

He became the first New Zealander to score hundreds in consecutive World Cup innings and the first of his countrymen to bat through the full 50 overs three times in ODIs.

Gayle became the first man to make a World Cup double hundred against Zimbabwe in Canberra on 24 February.

But his record lasted only 25 days, with Gayle congratulating Guptill on the field when the New Zealander surpassed his score.

Wellington have been spoilt!! First Southee vs England now Guptill vs WI

“Stand up New Zealand, stand up the world. Just glorious.”

What a knock by Guptill. Great call to stick with him when he couldn’t buy a run before the World Cup.