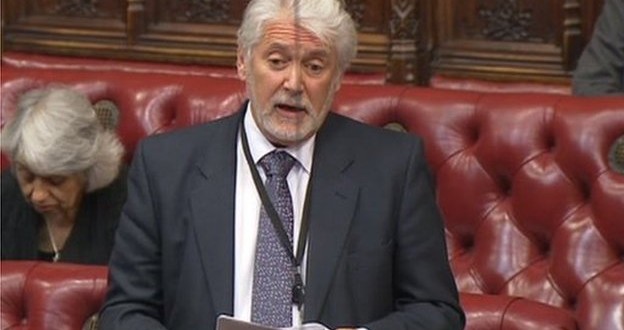 Lord Strasburger said he had invited the Electoral Commission to investigate

A Liberal Democrat peer has resigned from his party’s group in the House of Lords following allegations expected to be made in a Channel 4 investigation.

The Daily Telegraph reported that Dispatches will allege “a £10,000 donation was paid by the stepfather of an undercover businessman which would be against the rules on donations.”

Lord Strasburger of Langridge has denied doing anything wrong.

The allegations are due to be broadcast in the Channel 4 programme next week.

The BBC has not seen any evidence to corroborate what the Daily Telegraph is reporting and neither has it heard from Channel 4.

Under rules overseen by the Electoral Commission and set out in law, any donation above £7,500 has to be declared and the use of a proxy as a donor – to hide the real giver of the money – is not allowed.

In a statement published by the Liberal Democrats, Lord Strasburger said: “Whatever Channel 4 may say in their Dispatches programme, I do not think I have committed any offence.

“Having said that, I believe that we should all be accountable for what we do, so I have invited the Electoral Commission to carry out an investigation into my actions.

“In the meantime, whilst I maintain that I have committed no offence, I have stopped fund-raising for the party.

“Also, for the sake of the party, I have resigned the whip from the Liberal Democrat group in the House of Lords until the investigation is completed.”

In a response to a suggestion in the Daily Telegraph that this apparent donor, working for Dispatches, had met the Lib Dem leader Nick Clegg, a spokesman for the party said: “It is common practice for senior party figures from all parties to meet with potential and current donors.”

The statement adds: “Dispatches has raised important questions about one particular donation, which the party is taking seriously.

“The party had no reason to believe that the donation was made by anyone other than the person who signed the cheque.”

Lord Strasburger, 68, from Bath, is a semi-retired businessman who took his seat in the House of Lords as a life peer in 2011.