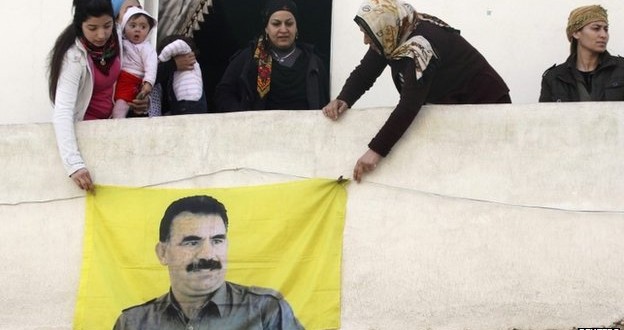 Ocalan remains a popular and influential figure despite his incarceration

The jailed Kurdish rebel leader Abdullah Ocalan has renewed a call for his fighters to end their armed struggle in Turkey.

In a message read out at a huge rally marking the Kurdish new year, Ocalan called for a congress to decide on abandoning the insurgency.

His Kurdistan Workers’ Party (PKK) has been waging a 30-year armed struggle for Kurdish independence.

He called a ceasefire in 2013 and there are growing hopes of a long-term deal.

More than 40,000 people, mostly Kurds, have died in fighting for a Kurdish homeland in Turkey’s south-east.

Ocalan has been in prison since 1999, serving a life sentence for treason.

His message was delivered instead by Sirri Sureyya Onder, a pro-Kurdish politician who visited Ocalan in jail on Thursday.

Hundreds of thousands attended the celebration in Diyarbakir, the largest Kurdish-populated city in eastern Turkey, with many carrying images of the imprisoned leader.

A ceasefire announced by Ocalan in 2013 still holds despite ongoing mistrust between the two sides.