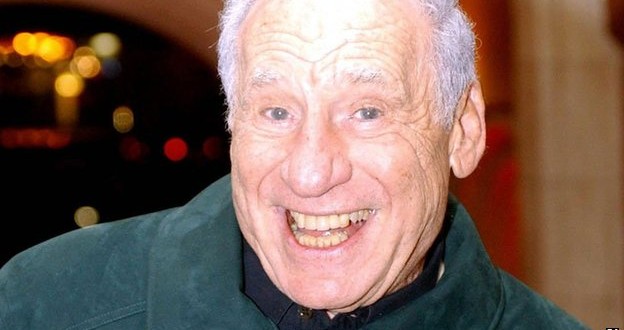 Mel Brooks will perform a solo show in London on Sunday

Comedy legend Mel Brooks has said he is “deeply honoured” to receive an outstanding achievement award from the British Film Institute (BFI).

The 88-year-old was awarded the BFI fellowship at a private event in London on Friday.

Brooks performs a solo show at London’s Prince of Wales Theatre on Sunday.

“When I was informed that I had been chosen, I was surprised and delighted,” Brooks said.

“Not many Americans have been offered this prestigious award… and for good reason.”

The fellowship is the highest accolade the BFI can bestow.

“His brilliant wit and satire have continued to surprise and delight and, sometimes, astonish, as he delights in flouting convention, taking comedy to areas once held taboo,” said Greg Dyke, BFI chair.

“Mel’s irrepressible energy and dazzling originality have made the world a much funnier place.”

Mel Brooks began his career as a stand-up comic in the 1940s and went on to make his name as a writer, actor, producer and director.

In 1969, he won an Oscar for writing The Producers, a comedy about two schemers who figure out how to make money by producing a sure-fire Broadway flop – a musical about Adolf Hitler.

A stage musical version of The Producers, starring Jason Manford, began a UK tour this month.

Previous recipients of the BFI fellowship include Sir Christopher Lee, Dame Judi Dench, Martin Scorsese and Orson Welles. Since 1983, a total of 79 fellowships have been awarded.