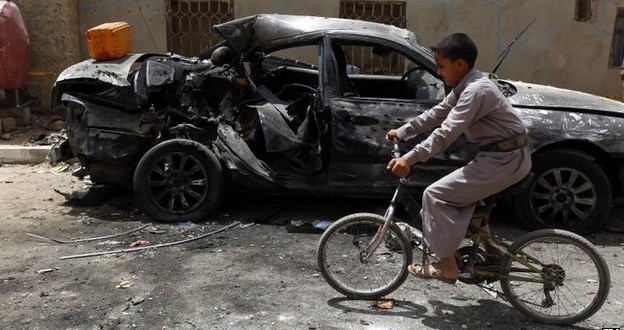 US troops 'withdraw from Yemen'

The security situation is Yemen has significantly deteriorated

The US is withdrawing its military personal from a base in Yemen because of increasing insecurity there, Yemeni sources say.

About 100 troops, including special forces commandos, are leaving al-Anad air base near the southern city of al-Houta, the officials said.

The city was stormed by al-Qaeda fighters on Friday, although they were later driven out by the Yemeni army.

The US military has not confirmed the evacuation.

It comes a day after suicide bombers killed at least 137 people in the capital Sanaa. Militants allied to Islamic State (IS) said they carried out the attack.

There are mounting tensions between various powerful, armed elements in Yemen, including Houthi rebels, al-Qaeda and IS.

US troops at al-Anad air base have been training Yemeni fighters to launch attacks against al-Qaeda operatives.

On Friday, al-Qaeda fighters took control of al-Houta, near to the airbase. But the militants were later driven back by the army.

The US closed its embassy in Sanaa in February after Houthi rebel forces took over the city.

In other developments, Yemeni President Abdrabbuh Mansour Hadi made his first television address since fleeing Sanaa last month, after Houthi rebels took over the city and put him under house arrest.

He demanded that Houthi rebels withdraw from the capital but also urged all parties to engage in peace talks.

He added that he would “raise Yemen’s flag” in the rebel group’s heartlands in the north.

Soon after Mr Hadi spoke, the Houthis called for a general mobilisation of their forces against those loyal to the president.

Yemen is the base of al-Qaeda in the Arabian Peninsula (AQAP), a powerful offshoot of the jihadist militant group.

However, IS is also gaining ground in the country, after setting up a base in Yemen in November,