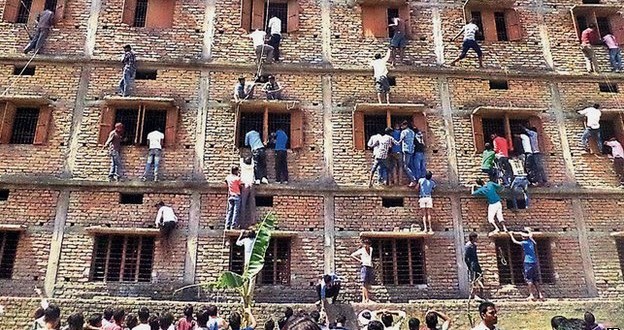 The images have embarrassed regional authorities in India

About 300 people have been arrested in the Indian state of Bihar, authorities say, after reports emerged of blatant cheating in school exams.

Parents and friends of students were photographed climbing school walls to pass on answers.

Many of those arrested were parents. At least 750 students have been expelled.

An estimated 1.4m students are taking their school leaving exams in Bihar alone – tests seen as crucial for their chances of a successful career.

The authorities have clearly been embarrassed by the cheating, the BBC’s Jill McGivering says, with the episode prompting ridicule on social media.

Students were seen copying answers from smuggled-in note sheets, and police posted outside test centres were even seen being bribed to look the other way.

On top of the arrests, in four centres further exams have been cancelled.

Bihar Chief Minister Nitish Kumar condemned the cheating but said the images were not the “whole story” of his state.

He warned parents that helping their children cheat would only harm them in the long run.

State Education Minister PK Shahi said it would be difficult to conduct fair exams without help from parents, given the potential number of people involved.

“Is it the responsibility of the government alone to manage such a huge number of people and to conduct a 100% free and fair examination?”

Hundreds of students have been expelled following the reports