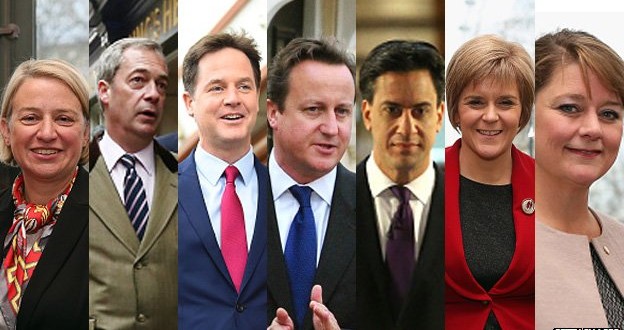 Broadcasters say a deal over the TV election debates has been reached, with PM David Cameron taking part in one with seven party leaders but no head-to-head with Labour’s Ed Miliband.

The live debate with the seven leaders will take place on ITV on 2 April, moderated by Julie Etchingham.

A debate on 16 April on the BBC will involve five opposition party leaders.

The PM and Mr Miliband will separately take part in a live question and answer programme on Channel 4 and Sky News.

The 90-minute programme presented by Jeremy Paxman and Kay Burley will take place on 26 March.

The BBC, ITV, Sky and Channel 4 said the announcement follows talks with the parties.

A spokesperson for the broadcasters said: “We’re delighted that there will be a debate with all the party leaders during the election campaign. The debate on 2 April will build on the success of the 2010 TV debates which were so highly valued by viewers.”

But opposition parties complained Downing Street had been allowed to influence the format of the debates.

Mr Miliband told the BBC: “David Cameron is now in the ridiculous position where he’ll go to the same studio as me, on the same night as me, with the same audience as me but he won’t debate me head to head as he’s running scared.

“I’m going to keep the offer of a head-to-head debate on the table right up to election day as it’s what the British people want.”

But a Tory source quoted by the Press Association said “if anything this is an improvement on the deal we were offered last week. The PM has always believed too many debates would suck the life out of the campaign”.

The debate involving opposition party leaders will be moderated by David Dimbleby.

The BBC says it will ensure “fair representation” of the Northern Ireland parties, as well as the Conservatives and Liberal Democrats, to ensure impartiality, although the details of how this will be achieved are yet to be finalised. Earlier this week, the DUP said it was examining whether to pursue legal action against its exclusion from the debates.

There will also be a special Question Time on BBC One, a week before polling day, with Mr Cameron, Mr Miliband and Lib Dem leader Nick Clegg appearing separately on the programme to answer questions from a studio audience.

Weeks of wrangling between the political parties and the broadcasters had cast doubt on whether the leaders’ debates – first held in 2010 when then PM Gordon Brown, Mr Cameron and Mr Clegg participated in three events – would be repeated before the 7 May poll.

Mr Cameron rejected proposals because they did not include the Greens. But last week the prime minister said while he would not participate in a debate after the start of the campaign on 30 March, he had signed up to a “formal offer” for a new format of TV election programmes, including the one multi-party debate.

Responding to the announcement from broadcasters, a Liberal Democrat spokesman said: “We have told the broadcasters that we will take part in the proposed format, just as we have said we would take part in all the proposed packages to date… despite our strong objections to being excluded from any TV debate or interview.”

Mr Farage described the situation as an “utter farce”

He tweeted: “TV debates are now so far from the original proposals. Broadcasters should be ashamed. They’ve kowtowed to manipulation from Downing Street.”

Scottish National Party leader Nicola Sturgeon said: “Our preference would have been for broadcasters to stick to their original proposals, and not be pushed around by the Westminster parties, particularly the Tories. However, it is good… we can get on to discussing the real issues of substance.”

Green Party leader Natalie Bennett welcome the “end of the debate about the debates,” adding that “David Cameron’s intransigence has delayed this process, and taken away space in which we might have been debating the future of Britain”.

Plaid Cymru leader Leanne Wood said: “No politician should be able to choose whether to be held accountable or not… Though it falls short of the original proposals, I welcome this statement from the broadcasters.

“It’s important that people in Wales and the other nations in the UK are presented with a true reflection of the choice facing them.”