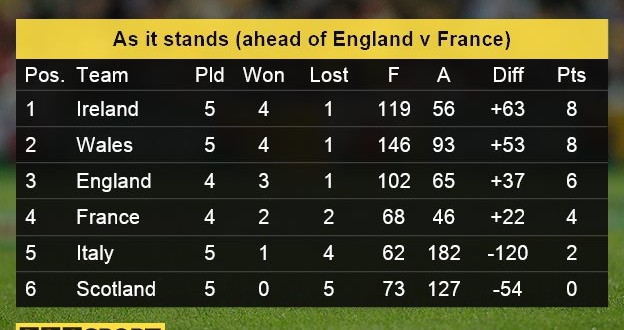 Defending champions Ireland moved into pole position in the Six Nations title race with a record win in Scotland.

Needing a 21-point victory after

Ireland led 20-10 at half-time after converted tries from Paul O’Connell and Sean O’Brien.

England must beat France by 26 points

to deny the Irish.

Winless Scotland, whose first-half try came from fly-half Finn Russell, were condemned to the Wooden Spoon.

Scotland crossed in the first half through the inventive Russell, but were largely outclassed on the day, and the defeat rounds off a dismal Six Nations for Vern Cotter’s men.

Hopes had been high before the tournament after an encouraging autumn test series under the New Zealander, but hopes of a new dawn for Scottish rugby came to nothing.

The two sides entered this encounter with wildly differing goals. Pride was the greatest prize on offer for the Scots as they looked to avoid the ignominy of a Six Nations whitewash.

The prospect of retaining their championship crown – for the first time in 66 years – was fuelling Irish fire, and they underlined their intentions by carving the home side open within the first five minutes.

Johnny Sexton executed a planned move among the backs to perfection, releasing Robbie Henshaw into space. Only a terrific last-ditch tackle from Stuart Hogg – who bailed the Scots out in similar fashion on several occasions at Twickenham the week before – kept Henshaw away from the tryline, but the Irish patiently ran through the phases before captain O’Connell ploughed over from close range.

Sexton’s conversion and subsequent penalty gave the visitors a commanding 10-point lead in as many minutes, with the Scots continually turning over possession in the tackle.

A sustained period of possession in the Irish 22 brought the hosts their first points through the boot of Greig Laidlaw, but on 25 minutes they conceded a desperately poor try.

A long throw to the tail of the lineout on the home 22 found O’Brien, who had only a couple of weak challenges to negotiate as he stormed over for Ireland’s second try.

To their credit, the Scots looked to play their own expansive game, and they got their reward when Russell finished off some fine play – involving the electric Hogg among others – to cross over and give the men in dark blue renewed hope.

Sexton knocked over a penalty either side of half-time and when Payne sliced through the Scottish backline to score under the posts, the Irish sensed the victory was assured at 30-10. Now it was time to rack up the points.

Sexton missed two kicks before nudging his team above the magic 21-point margin with another penalty, and O’Brien rounded off another period of incessant pressure near the tryline by crashing over for his second try, Ireland’s fourth.

Scotland’s wretched day was summed up when Hogg dived over in the corner, only to have the try ruled out after failing to ground the ball properly.

Ireland missed a late penalty through Ian Madigan, and though it mattered little in this game, events at Twickenham will reveal just how crucial that missed kick will be.

Scotland suffered their sixth successive home defeat in the Six Nations, their worst run at Murrayfield in the Championship since 1970