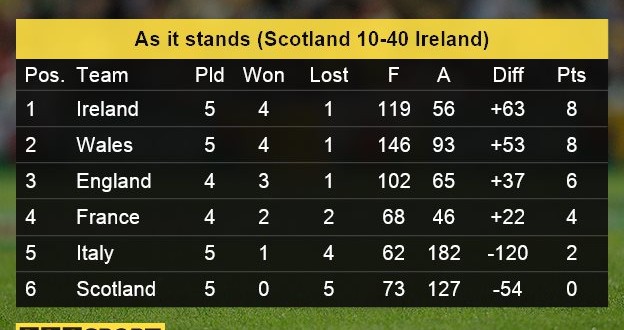 Wales produced a stunning second-half performance to crush Italy by a record margin, but Ireland’s victory in Scotland means the Six Nations title will go to the defending champions or England.

England now have to beat France at Twickenham by 26 points to overtake Ireland at the top of the table, with France already out of contention.

Wing George North raced in for a hat-trick of tries against Italy, as Wales turned a one-point half-time lead into a 41-point winning margin.

There was little in a first-half stalemate to suggest Wales could cut loose in the manner they did.

Their front row struggled at the scrums and the backline were prone to errors, as Italy belied the poor form that had seen them capitulate 29-0 to France last week.

Roberts scored a first-half try for Wales, answered by Venditti, with Leigh Halfpenny kicking a brace of penalties which were matched by Kelly Haimona and Orquera, who also converted Venditti’s try.

Halfpenny left the field with concussion

after tackling Samuela Vunisa, and his penalty gave Wales a barely-deserved 14-13 lead at the break.

However, the Welsh emerged a different team for the second half, with Liam Williams getting the ball rolling when he touched down after Webb’s quick penalty.

Two minutes later Liam Williams sent North racing over for his first try and when Andrea Masi was shown a yellow card for an early tackle, the floodgates opened.

North completed his hat-trick in 10 minutes, followed by scores for Webb, Warburton – after a sensational 80-yard move – and Scott Williams, as Warren Gatland’s team made Italy pay for Quintin Geldenhuys’ yellow card.

Sarto’s last-minute sprint down the left touchline ended a run of 47 unanswered points, and the Welsh fans gave their team a hearty ovation before heading off to find hostelries screening Scotland v Ireland and England v France.

But Wales were relentless in the second half, with George North running in his first Test hat-trick

Leonardo Sarto scored a late Italy try though, to chip away at Wales’ point difference