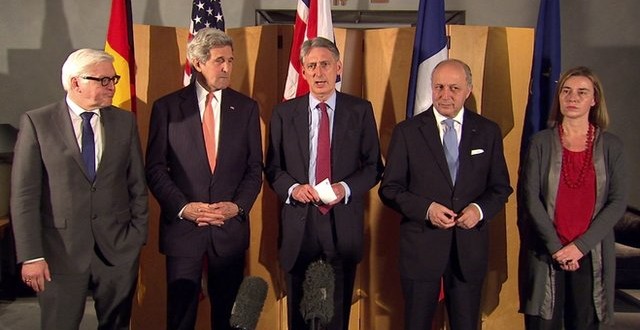 Western powers negotiating an agreement with Iran on its nuclear activity will not accept “a bad deal”, UK Foreign Secretary Philip Hammond says.

Ministers from France, Germany, and the UK along with the US Secretary of State met in London amid increased urgency to reach agreement by the end of March.

“There is nothing that cannot be resolved,” although some differences still remain, Iranian state media quoted President Hassan Rouhani as saying.

Mr Rouhani said that in the current round of talks in Lausanne, Switzerland, “shared points of view emerged in some of the areas where there had been a difference of opinion” and these could become “a foundation for a final agreement”.

Speaking after Saturday’s talks in London, Mr Hammond said: “We will not do a bad deal that does not meet our red lines.”

An official statement from the meeting said: “We agreed that substantial progress had been made (with Iran) in key areas although there are still important issues on which no agreement has yet been possible.

“Now is the time for Iran, in particular, to take difficult decisions.”

The four powers, along with China and Russia, make up the so-called P5+1 which is negotiating with Iran to scale back sensitive nuclear activities in return for an easing of international economic sanctions.

Both Iran and the Western powers have set themselves deadlines of 31 March for a political framework agreement and 30 June for a final deal.

US Secretary of State John Kerry also said that “substantial progress” had been made in the talks although “important gaps” remained.

Mr Kerry flew to London from Switzerland and will return there to resume talks with Iran next week.

But in a reminder of more hardline attitudes within the Iranian leadership, Supreme Leader Ayatollah Ali Khamenei warned on Saturday against submitting to foreign demands in order to achieve economic growth.

Sticking points in the nuclear talks are thought to include the pace at which sanctions would be lifted, how long the deal will last and how much of Iran’s nuclear facilities will be open to inspection.