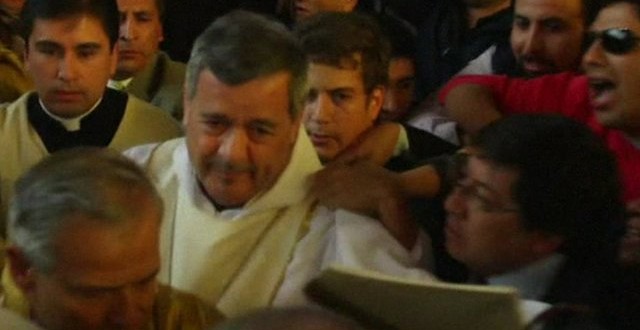 Protesters in southern Chile have tried to stop the ordination of a Catholic bishop, accusing him of covering up a priest’s sexual abuse of young boys.

Police in the city of Osorno said at least 650 people turned up at the cathedral wearing black in protest against the ordination of Juan Barros.

The protesters say Bishop Barros used his position in the Church to try to deter an investigation into the actions of his mentor, Fernando Karadima.

Last Monday he sent a letter to priests saying: “I never had knowledge of, or could have imagined, the serious abuses that this priest committed against the victims.”

Before boarding a plane in Santiago, Bishop Barros, 58, said he had “confidence in the future”.

More than 1,000 people wrote to Pope Francis to ask him to review the appointment.

“I believe the Catholic Church is not listening to its people,” said Christian Democrat congressman Sergio Ojeda.

“That is why we are asking for Bishop Barros to show dignity and resign, putting an end to this tremendous problem,” he told La Tercera newspaper.

Supporters of the new bishop, wearing white and holding white balloons, tried to stop the protest

Before the scandal, Fernando Karadima was one of Chile’s most influential and respected priests

The top leaders of Chile’s Catholic Church and most of the local authorities stayed away, but the ceremony went ahead in the morning in Osorno, some 900km (560 miles) south of the capital, Santiago.

Protesters outside and inside the cathedral attempted to stop the ordination going ahead.

There was a heavy police presence there and three people were arrested.

Supporters of Bishop Barros also attended the ordination and said he was a good man, misunderstood by many.

Juan Barros was a protege of Father Karadima, who spent decades training young men to enter the priesthood, and regularly celebrated Mass at a well-known church in Santiago.

In February 2011, the Vatican found Father Karadima, then 81, guilty of sexually abusing children.

The Vatican ordered him to a life of “penitence and prayer” in a monastery in Santiago.

Months later, a judge dismissed a criminal case against him, saying the alleged crimes had been committed too many years before.

The BBC’s Gideon Long, in Santiago, says that before the allegations surfaced, Father Karadima was one of the most respected and influential priests in Chile.