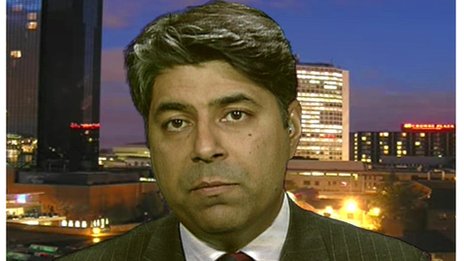 Afzal Amin has been suspended as a candidate “with immediate effect”

A Conservative candidate at the general election has been suspended over allegations he schemed with the English Defence League to win votes.

The Mail on Sunday reported that Afzal Amin plotted with the EDL to announce a march against a new “mega-mosque” in the marginal seat of Dudley North.

The paper said Mr Amin planned for the march to be scrapped so he could take credit for defusing the situation.

Mr Amin told the paper the allegations were “completely untrue”.

He has not returned a call from the BBC.

The paper claims secretly-filmed footage, obtained by the former EDL leader Tommy Robinson, shows former Army captain Mr Amin allegedly promising that he would be an “unshakeable ally” for the EDL in parliament and help bring their views to the mainstream.

The Mail on Sunday said that when it put it to him he was trying to stir up racial hatred to win the seat, he said: “That’s absolutely untrue, it’s utter rubbish.”

Afzal Amin had been due to take on the Labour MP Ian Austin, who has a majority of 649

A Conservative Party spokesman confirmed that Mr Amin had been suspended.

“Following an emergency meeting it has been decided to suspend him as a candidate with immediate effect,” the spokesman said.

“The Conservative Party views this as a matter of extremely serious concern.”

A full disciplinary hearing is expected to be held on Tuesday, when Mr Amin will be able to explain his actions and a decision on his future will be taken, the BBC understands.

Prime Minister David Cameron is understood to have been informed of the situation and approves of the way it is being handled, BBC political correspondent Chris Mason says.

According to Mr Amin’s website, he grew up in the Black Country and was a mature student before spending 11 years in the Army where he saw operational service in Iraq and three times in Afghanistan.