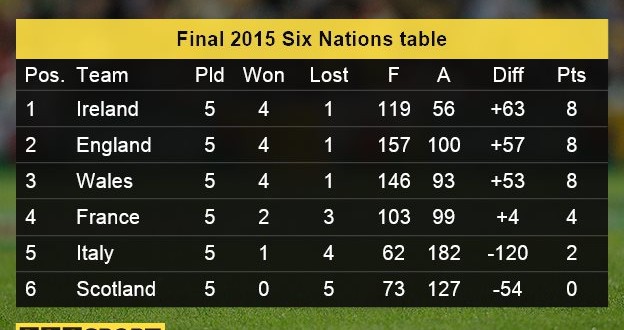 The day had started with

Ireland needed a huge win and

their 40-10 demolition of Scotland

was enough to both pass Wales and set a target just beyond England.

With three teams on three wins apiece going into the final round of games the stage was set, and what followed was one of the most incredible days in the tournament since it was first played in 1883, with 221 points scored in the three matches.

England started Saturday as leaders – just – from Ireland on points difference with Wales some way further back, and they would play in reverse order to decide who would become champions.

In the opener, Wales only led Italy by a point at half-time in Rome but cut loose in the second half, with George North’s hat-trick ensuring Ireland needed to beat Scotland by 21 points to take the lead on points difference.

The champions duly hammered Scotland by 30 points in Edinburgh, meaning Wales were out of contention and that England needed to beat France by 26 points to take the title.

In a see-saw encounter at Twickenham, England pulled steadily clear but never managed to get into a lead that would have denied Ireland the title.

However, Jack Nowell’s try with five minutes remaining put them 20 points ahead and meant a converted try would have given them the Championship.

They spent the closing moments hammering away at the French line in search of the winning points, and came within a foot of scoring, but in their desperation they infringed and the final whistle meant that although they had won handsomely, it was Ireland who are 2015 Six Nations champions.

It was a day of drama and extreme emotions for Wales, Ireland and England

Reaction from the winners – and losers

“I never would have predicted such a game at Twickenham. Fair play to England and fair play to France. I’ve never received a trophy in such a bizarre situation [after being handed the cup on the Murrayfield pitch]. It’s strange. In some ways it’s better than last year.”

“I’m gutted really. It was one of the most courageous performances I’ve seen from a team. It was an unbelievable game of rugby.”

“It was tumultuous. Exhausting. I spare a thought for England, they were superb today and probably deserved a share of the spoils.”

“I don’t really know what to say. I’m devastated. Congratulations to Ireland. We’re devastated. We gave it a crack, but you can’t let them get back in the game.”

“We knew what we had to do at half-time and we executed it very well. It was important we expressed ourselves. We had to win the game first and foremost and we stuck to our guns and got the result.”

“We knew if we scored a couple of tries to get ahead of Italy we would break their spirit. It was a great second-half performance.”

“England will feel desolate. There is very little to choose between the top three teams on any given day.”

“I am massively, massively disappointed by Scotland. I expected them to come out and put on a performance. But they have laid down and that is very sad to see.”

What the fans thought