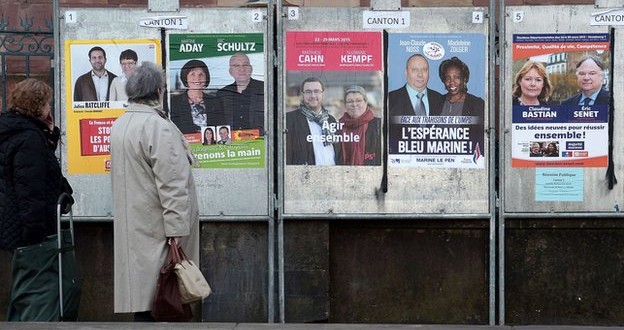 The election is being fought in two rounds

People in France are due to vote in local elections in which the far-right National Front party is expected to score big gains.

Voters are electing representatives in 101 departments, or counties, charged with issues like schools and welfare.

Sunday’s first round will be followed a second in a week’s time.

Polls suggest that the Socialists of President Francois Hollande will suffer another setback, after defeats in municipal and EU elections last year.

The Socialists and the centre-right UMP have been joined by Marine Le Pen’s National Front (FN), not as a freakish upstart but a serious contender for power, our correspondent adds.

The FN has benefited from economic stagnation, high unemployment, and general hostility to mainstream parties.

The governing Socialists and their left-wing allies are expected to take the biggest hit, losing many of the 61 departments they hold.

But the FN is also taking voters from the UMP, which has struggled to unify behind a single leader since the defeat of Nicolas Sarkozy in the 2012 presidential election.