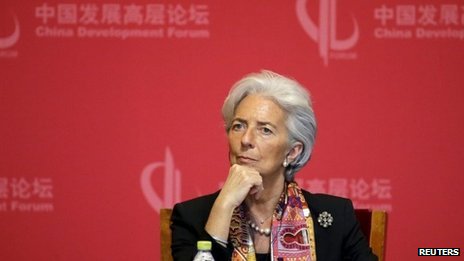 IMF to co-operate with China-led bank

Mrs Lagarde has been attending an economics forum in China

International Monetary Fund chief Christine Lagarde has said the IMF would be “delighted” to co-operate with the China-led Asian Infrastructure Investment Bank (AIIB).

The AIIB has more than 30 members and is envisaged as a development bank similar to the World Bank.

Mrs Lagarde said there was “massive” room for IMF co-operation with the AIIB on infrastructure financing.

The US has criticised the UK and other allies for supporting the bank.

The US sees the AIIB as a rival to the World Bank, and as a lever for Beijing to extend its influence in the region.

The White House has also said it hopes the UK will use “its voice to push for adoption of high standards”.

Countries have until 31 March to decide whether to seek membership of the AIIB. As well as the UK, other nations backing the venture include New Zealand, Germany, Italy and France.

Mrs Lagarde, speaking at the opening of the China Development Forum in Beijing, also said she believed that the World Bank would co-operate with the AIIB,

China established the Asian lending institution in 2014 and has put up most of its initial $50bn (£33.5bn) in capital.