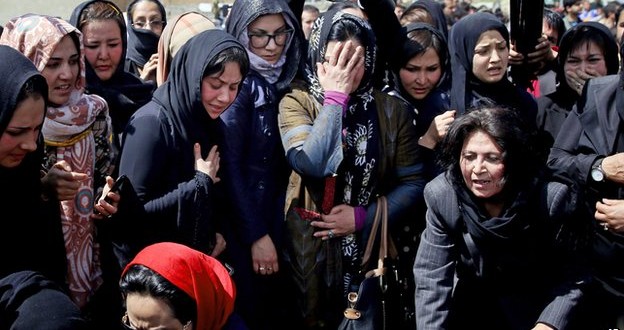 The coffin of a woman, killed by a mob in Kabul on an apparently false charge, has been carried by women, marking a break with Afghan funeral customs.

Hundreds of people attended a funeral for the woman, named as Farkhunda, demanding her killers be punished.

Farkhunda had been accused of burning the Koran, but an official investigator said there was no evidence for this.

The attack on the woman, as well as the alleged failure of police to intervene, have been heavily criticised.

Afghan President Ashraf Ghani said he had ordered an investigation into the killing.

Footage of the attack, filmed on mobile phones, has been widely circulated on social media.

The mourners demanded justice for Farkhunda

A relative said Farkhunda, seen here on a placard at the funeral, was training to become a teacher

A mob, largely made up of men, attacked the woman with sticks and stones, beating her to death before setting her body alight, while police reportedly looked on.

Witnesses said the crowd had accused the woman of burning a copy of the Koran.

The attack, near the Shah-Du-Shamshaira mosque and shrine, is thought to have been the first of its kind in Afghanistan.

At the funeral on Sunday, women’s activists carried the coffin, breaking with tradition as men usually perform that role.

An interior ministry official in charge of investigating the case said he had found no evidence that the woman had burnt the Koran.

Earlier claims that the woman was mentally ill have also been contradicted by a relative and a neighbour.

Farkhunda’s brother told Reuters news agency that his sister was training to be a religious teacher. He said her father had said she was ill after hearing of her death, out of a desire to protect the rest of the family.

A neighbour of the family, interviewed by the Associated Press, also said the woman had no history of mental problems and had been training as a teacher.

The US has spent millions of dollars on programmes designed to empower and educate Afghan women.

However, women in much of the country still suffer discrimination, and attacks on them often go unpunished.