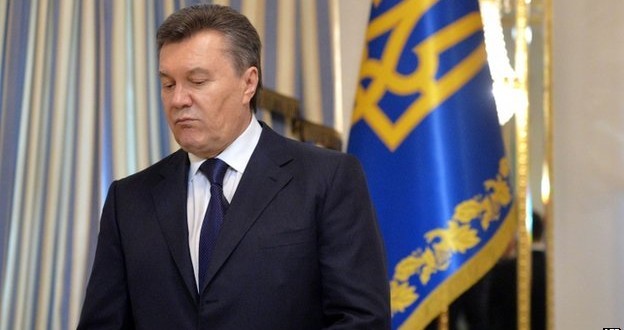 Ukrainian MP Nestor Shufrych confirmed to the BBC the death of the ex-leader’s son, who was also called Viktor.

Earlier Russian and Ukrainian media reports said he died after his vehicle fell through ice on Lake Baikal in the south of the Russian region of Siberia.

It appears to be the latest in a series of deaths involving people connected to the deposed president.

Mr Yanukovych fled to Russia after he was toppled in February 2014, following mass street protests.

Ukrainian news website Levvy Bereg quoted sources from his inner circle saying Viktor Yanukovych Jr, 33, was taking part in a sporting event when the Volkswagen van he was driving fell through ice.

He drowned while five other passengers escaped, it said.

Russian website RBK quoted local officials as saying the incident happened on Saturday, after the group drove on to the ice to take photographs.

Viktor Yanukovych Jr was known for his passion for extreme driving, according to BBC Monitoring.

His death comes after Oleksandr Peklushenko, a former regional governor, was found dead in Ukraine earlier this month in what authorities said appeared to be a suicide.

Five other officials also died in mysterious circumstances this year.

Saturday’s incident also appears to be the latest in a series of deaths in traffic accidents involving the former president or his team.

In July 2009 the son of Volodymyr Sivkovych, Mr Yanukovych’s then-deputy secretary of the National Security and Defence Council who was involved in an attempt to disperse pro-EU protesters, died when his car veered off the road, hit a pole and caught fire in central Kiev.

A few months later, the son of Mr Yanukovych’s de-facto spokeswoman, Anna Herman, died in a car crash on the Kiev-Odessa highway.

Interpol placed Mr Yanukovych on its wanted list in January. He is accused by Ukrainian officials of embezzling millions of dollars in public funds.

He was deposed after thousands of people took part in street protests following his government’s rejection of a far-reaching accord with the European Union in November 2013 in favour of stronger ties with Russia.