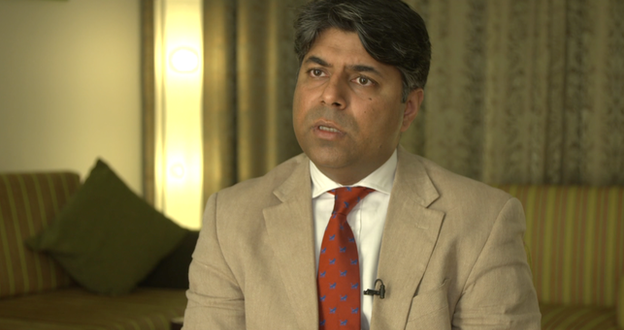 Afzal Amin has been suspended as a candidate “with immediate effect”

A Conservative election candidate who has been suspended by his party has said he did not seek a “fake” English Defence League march to win votes.

The Mail on Sunday reported Afzal Amin plotted to persuade the EDL to announce a march in Dudley North and then to scrap it to allow him to take credit.

Speaking to the BBC, he denied it was fake, saying it would have been a “catalyst to bring people together”.

A Tory party spokesman said Mr Amin had been suspended “with immediate effect”.

Mr Amin has been accused of secretly organising the march with the EDL in Dudley North – where he had been selected to stand as the Conservative candidate at the general election – to gain popularity.

In return he is alleged to have said he would be an “unshakeable ally” for the EDL in parliament and help bring their views to the mainstream.

However, he was reportedly filmed by EDL founder Tommy Robinson, who said Mr Amin had sought to “use” the organisation.

Speaking to the BBC in Dubai, Mr Amin said: “The point was to announce a march that would bring people together to discuss, and through discussions, tensions would be resolved.”

Mr Amin looked surprisingly relaxed as he joked he’d been in far worse battles before – that involved life and death – referring to his many years in the British Army.

He said that longstanding commitments with very important people had forced him to stick to his travel plans and fly here last night despite the ensuing political storm.

At the end of our interview, his eyes welled up but he insisted he wasn’t yet ready to cry. He did admit that he was very upset and it was “heartbreaking”.

His brother then took him away downstairs as they started to imagine out loud what the reception would be like when they land back in the UK on Monday and whether the story will have blown over by then.

Mr Amin said tensions in Dudley had been raised by plans for a new mosque and that he had then spoken with both Muslim leaders and EDL members, including Tommy Robinson.

He said his plans were an exercise in “conflict resolution”, adding: “I wanted to see these two communities really learn more about each other through face-to-face discussion.”

He said there was always “a degree of stage management” when you tried to resolve conflict but denied it was a “deception”.

“It was simply a way of building confidence between communities”, he said.