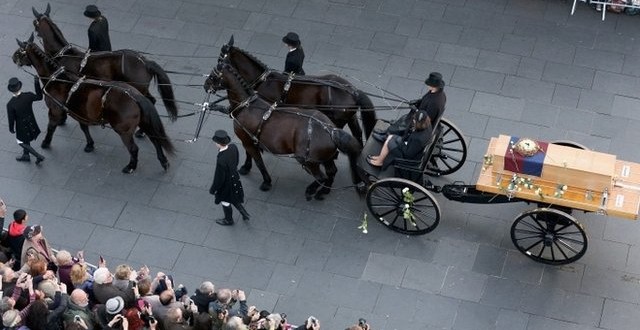 King Richard III’s remains have arrived at Leicester Cathedral ahead of his reburial.

His funeral cortege entered the city at the historic Bow Bridge after touring landmarks in the county.

Cannons were fired in a salute to the king at Bosworth, where he died in 1485.

His coffin will be on public view at the cathedral from 09:00 GMT on Monday. He will finally be reinterred during a ceremony on Thursday.

Richard’s skeleton was found in 2012, in an old friary beneath a car park.

The former king’s coffin, which is made of English oak from a Duchy of Cornwall plantation, emerged during a ceremony at the University of Leicester.

Archaeologists, academics, researchers and descendants of Richard III’s family, including Michael Ibsen who built the coffin, placed white roses on it during the ceremony.

The Bishop of Leicester, the Right Reverend Tim Stevens, led a short ceremony at Bosworth

The reburial procession began at Fenn Lane Farm, believed to be the closest spot to where the king was killed.

Ceremonies were held for the king as his cortege travelled through the county, including those at Bosworth Battlefield Heritage Centre and Bow Bridge.

Ahead of the cortege arriving in Leicester, city mayor Peter Soulsby said: “It was from Leicester in 1485 that Richard rode out to battle and it was to Leicester that he returned, defeated, slung ignominiously across the back of a horse.

“It’s now our opportunity to put it right and to make sure this time that it’s done with dignity and honour.”

However, campaigners who petitioned for Richard III to be reburied in York have described the events in Leicester as a “pantomime”.

Louise Hollingsworth wrote on Facebook: “The more I see of the undignified, money-grabbing pantomime surrounding King Richard III in Leicester this weekend, the more incensed I become.”

After a service at St Nicholas Church, the coffin was transferred to a horse-drawn hearse before arriving at the cathedral via High Street and Grey Friars.

The public will be able to view the coffin at the cathedral from Monday to Wednesday before a reinterment service on Thursday.

A spokesman for Leicester Cathedral has confirmed that the Queen has written a greeting that will appear in the order of service at the reinterment but details of the message’s content will not be released ahead of the event.

Are you in Leicester for the reburial of King Richard III? You can share your experiences by emailing [email protected].