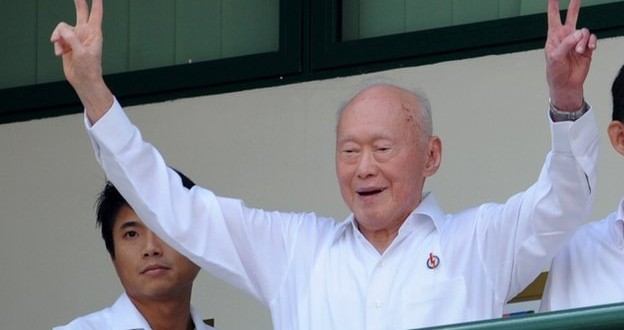 Lee Kuan Yew, the statesman who transformed Singapore from a small port city into a wealthy global hub, has died at the age of 91.

The city-state’s prime minister for 31 years, he was widely respected as the architect of Singapore’s prosperity.

But he was criticised for his iron grip on power. Under him freedom of speech was tightly restricted and political opponents were targeted by the courts.

A state funeral will be held on 29 March, after a week of mourning.

His death was announced by the office of Prime Minister Lee Hsien Loong, Mr Lee’s son, early on Monday.

He died peacefully at Singapore General Hospital at 03:18 on Monday (19:18 GMT on Sunday), the statement said. He had been in hospital for several weeks with pneumonia.

UN Secretary General Ban Ki-moon said he was “deeply saddened” by Mr Lee’s death. US President Barack Obama described him as a “giant of history”.

A charismatic figure, Mr Lee co-founded the People’s Action Party (PAP), which has governed Singapore since 1959, and was its first prime minister.

The PAP said in a statement on Facebook: “While we mourn the passing of one of the greatest leaders of our party, we celebrate his incalculable contributions to Singapore and its people.”

Singapore’s President Tony Tan has written an open letter of condolence in which he describes Mr Lee as “the architect of our modern republic”.

The news broke early in Singapore, but it was an announcement many had expected. Mr Lee had been in hospital for more than a month and his condition worsened last week, prompting a deluge of concern both online and at public areas set up for people to pay tribute.

As the nation woke up, a few people began arriving at the hospital, including a retiree and a family of four who wanted to pay their respects before their children went to school. Television and radio immediately began playing pre-recorded packages on Mr Lee’s life.

Mr Lee’s son, PM Lee Hsien Loong, said he was “deeply grieved”. In the days leading to his father’s death, he had been a frequent visitor at the hospital. On Friday he shared a photo of himself as a baby smiling and held aloft by his father on social media. “So many happy memories over a lifetime,” he wrote.

Reaction in pictures and tweets

Mr Lee, a Cambridge-educated lawyer, led Singapore through merger with, and then separation from, Malaysia.

Speaking after the split in 1965, he pledged to build a meritocratic, multi-racial nation.

But tiny Singapore – with no natural resources – needed a new economic model.

“We knew that if we were just like our neighbours, we would die,” Mr Lee told the New York Times in 2007.

“We had to produce something which is different and better than what they have.”

Mr Lee set about creating a highly-educated work force fluent in English, and reached out to foreign investors to turn Singapore into a manufacturing hub.

Mr Lee had been critically ill at Singapore General Hospital, where people left tributes to him

As the news broke, people began arriving at the hospital to pay their respects

The city-state grew wealthy and later developed into a major financial centre.

But building a nation came with tight controls – and one of Mr Lee’s legacies was a clampdown on the press.

These restrictions remain today. In 2014, Singapore stood at 150 in the Reports Without Borders World Press Freedom Index, below countries like Russia, Myanmar and Zimbabwe.

Other measures, such as corporal punishment, a ban on chewing gum and the government’s foray into matchmaking for Singapore’s brightest – to create smarter babies – led to perceptions of excessive state interference.

“Whoever governs Singapore must have that iron in him. Or give it up,” he told a rally in 1980.