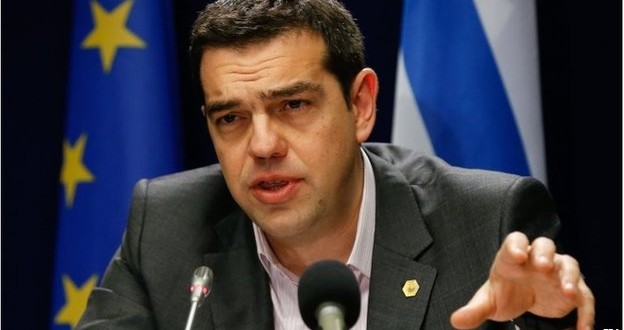 Alexis Tsipras will be making his first official visit to Germany

Greek Prime Minister Alexis Tsipras is due to meet German Chancellor Angela Merkel amid mounting concern that Athens is running out of money.

The two countries have been at odds over Greece’s efforts to renegotiate the terms of its international bailout.

The Financial Times reported on Sunday that Mr Tsipras had warned Mrs Merkel it could not meet imminent debt payments without new aid.

But Mrs Merkel said on Friday there would be no new money without reforms.

“There will not be any disbursement before there is a real test that the reforms have been approved and implemented.”

According to the FT, Greece’s precarious financial position was underlined in a letter sent by Mr Tsipras to Mrs Merkel on 15 March.

In the letter, he writes that Greece faced a short term cash flow-crisis and may have to choose between paying pensions and wages and meeting debt obligations.

Mr Tsipras seems clear which option he would choose, writing that to add to Greece’s social crisis was “a prospect that I will not countenance”.

At last week’s EU summit, Greece promised to meet creditors’ demands to present an economic reform package within days to unlock the cash it needs to avoid leaving the euro.

It was unclear whether Mr Tsipras would have a list of reforms to present at his meeting in Berlin with Mrs Merkel.

In a newspaper interview on Sunday, he said that the talks would not be “under pressure from negotiations”, a suggestion that the meeting may be more about bridge-building than hard bargaining.

But that may not be enough for many in the German government who are reluctant to extend Greece more money with coming up with reform programme.

“I expect [Mr Tsipras] to present this list in his talks with the chancellor on Monday,” said Thomas Oppermann, parliamentary leader of Merkel’s Social Democrat coalition partners. “I want to know once and for all if Greece is ready to reform or not.”

Yannis Palaiologos, author of The 13th Labour of Hercules, a book about Greece’s financial crisis, told the BBC’s World Business Report programme, that the meeting would be a chance “to re-build the personal relationship”.