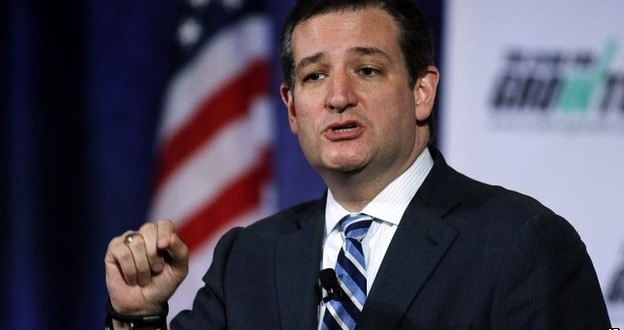 Senator Ted Cruz, who was born in Canada, was forced to give up his dual citizenship last year

Republican Senator Ted Cruz has confirmed that he is running for the US presidency in 2016, becoming the first Republican to declare his campaign.

The 44-year-old Texan is to set out his plans in detail in a speech at Liberty University in Virginia on Monday.

In a video posted on Twitter, he says: “It is going to take a new generation of courageous conservatives to make America great again.”

Several White House hopefuls are expected to announce their bids for the presidency in the coming weeks.

Mr Cruz may go up against the likes of Jeb Bush, an early Republican frontrunner, and New Jersey Governor Chris Christie, who are yet to formally declare their candidacy.

Republican Senators Rand Paul and Marco Rubio have also hinted at their own White House interests.

Meanwhile, Hillary Clinton is widely expected to be among those standing for the Democratic Party nomination.

Mr Cruz is a leading conservative who was elected to the US Senate in 2012.

In September 2013, the firebrand politician gave a 21-hour speech against President Barack Obama’s health law – one of the longest speeches in Senate history.

His eligibility to run for the White House was thrown into doubt after it emerged he was born in Canada, and he was forced to formally give up his dual citizenship last year.

Most have not formally declared but these are some of the names to watch: