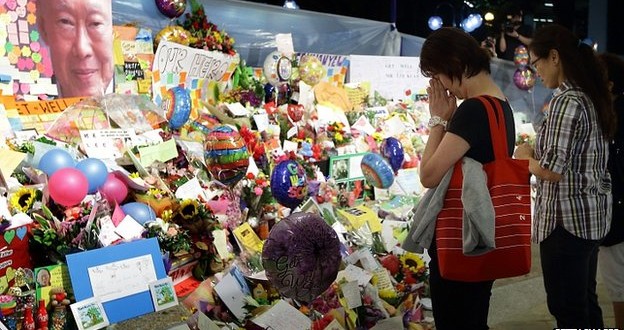 Flowers, messages and other tributes have been piled up outside the hospital where Lee Kuan Yew died

Mr Lee, who was 91, led Singapore’s transformation from a small port city to one of the wealthiest nations in the world.

World leaders have paid tribute to Mr Lee, who served as the city-state’s prime minister for 31 years.

US President Barack Obama described him as a “giant of history” whose advice had been sought by other world leaders.

Chinese President Xi Jinping said Mr Lee was a widely respected strategist and statesman, and Russian President Vladimir Putin described him as one of the “patriarchs” of world politics.

The period of national mourning will culminate in a state funeral next Sunday and Mr Lee’s body is to lie in state at parliament from Wednesday to Saturday.

A private family wake is taking place on Monday and Tuesday.

News of Mr Lee’s death came in a government statement that said he had “passed away peacefully” in the early hours of Monday at Singapore General Hospital. Mr Lee had been in hospital for several weeks with pneumonia and was on life support.

State television broke away from its normal schedules and broadcast rolling tributes.

Crowds greeted the hearse as it arrived at the Istana compound

Lee Kuan Yew was a charismatic but often controversial politician

As evening fell, many Singaporeans were continuing to arrive at the Istana, the compound housing the president’s official residence and the prime minister’s office, where a book of condolence has been placed.

Earlier, some chanted “Mr Lee, Mr Lee” as a hearse carrying the former leader’s body arrived at the compound.

An area has also been set aside outside the hospital for flowers and other tributes.

“His biggest achievement is that from zero he’s built up today’s Singapore.”

Books of condolence have also been opened at all Singapore’s overseas missions.

“He fought for our independence, built a nation where there was none, and made us proud to be Singaporeans. We won’t see another man like him,” he said.

Business in bustling Singapore carried on as normal. At the stock exchange, the normal stream of market prices displayed on a bank of screens instead read: Remembering Lee Kuan Yew, 16 September 1923 to 23 March 2015.

Lee Kuan Yew on the role of the state

I am often accused of interfering in the private lives of citizens. Yes, if I did not, had I not done that, we wouldn’t be here today (National Day Rally in 1986)

Mr Lee set about creating a highly educated work force fluent in English, and reached out to foreign investors to turn Singapore into a manufacturing hub.

He embarked on a programme of slum clearance, industrialisation and tackling corruption. He was a fierce advocate of a multi-racial Singapore.

However, Mr Lee also introduced tight controls, and one of his legacies was a clampdown on the press – tight restrictions that remain in place today.

Other measures, such as corporal punishment, a ban on chewing gum and the government’s foray into matchmaking for Singapore’s brightest – to create smarter babies – led to perceptions of excessive state interference.

Mr Lee criticised what he saw as the overly liberal approach of the US and the West, saying it had “come at the expense of orderly society”.