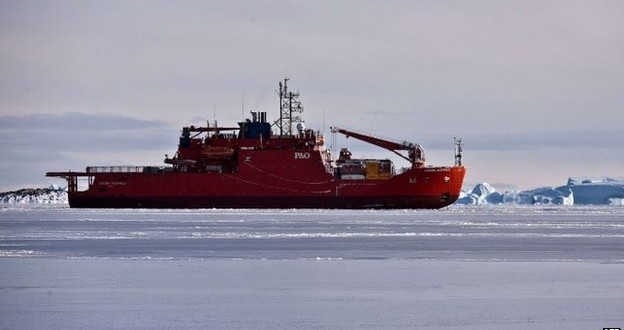 An Australian man has been evacuated from the country’s Antarctic ice station by helicopter after suddenly falling seriously ill.

The patient, who has not been named, was flown from Davis Station to Aurora Australis, a nearby icebreaker ship.

The ship had left the station two days earlier but turned back, battling through heavy ice to rescue the man.

The patient – who is now en route to Hobart, Australia – is said to be in a serious but stable condition.

The ill man was transferred to the ship by helicopter

The man’s condition, the details of which have not been revealed, was initially reported to be deteriorating quickly. But Mr Hunt said on Monday that he was stable.

“This is one of our very best expeditioners,” the environment minister told Australia’s ABC.

“All the signs from the medical reports are saying that it’s stable, but you can never take working in Antarctic operations for granted,” he said.

Davis is a permanent Australian scientific research base. It is home to about 120 people during the summer and 18 in the winter.