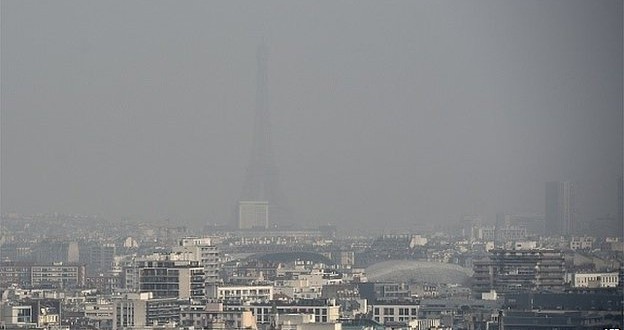 The French authorities have introduced measures to combat a sharp increase in pollution affecting Paris and other cities in northern France.

On Monday the number of cars on the road in Paris will be cut in half – only motorists with odd-numbered plates will be allowed to drive.

Public transportation will be free as well car-sharing and bike-sharing programmes.

Similar measures were put in place last year when pollution soared in Paris.

The mayor’s office announced at the weekend that alternating number plate measures would be implemented on Monday, with exceptions for electric or hybrid vehicles as well as emergency vehicles.

About 750 police officers are enforcing the restrictions in Paris, local media said

Public transport is free on Monday in Paris and surrounding towns to try to entice drivers to leave their cars at home.

About 750 police officers were being mobilised in the city and its suburbs to enforce the traffic restrictions which went into effect at 05:30 local time (04:30 GMT), Le Monde newspaper reported.