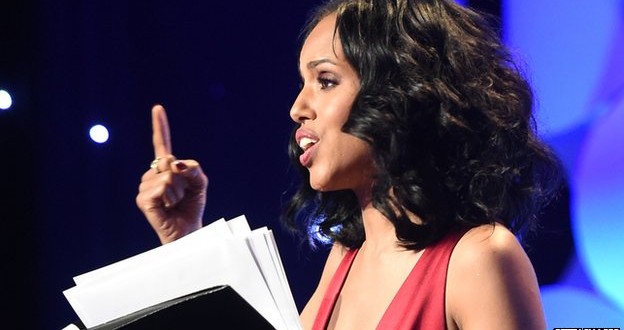 Scandal’s Kerry Washington has called for unity in the support of equal rights at an awards event promoting the gay community in the media.

“We must be allies in this business,” she said as she accepted the Vanguard award at Saturday’s Glaad Media awards.

“We can’t say that we believe in each other’s fundamental humanity, and then turn a blind eye to the reality of each other’s existence.”

Washington, who plays a political fixer in TV’s Scandal and was seen as a slave in Django Unchained, began her address by admitting she “might be preaching to the choir”.

But she said she would carry on “because on Monday morning, people are going to click a link to hear what that woman from Scandal said at that award show.”

The 38-year-old, who was honoured by Glaad (Gay and Lesbian Alliance Against Defamation) for being an “ally” to the LGBT (lesbian, gay, bisexual and transgender) community, said she was often told by black people that they objected to gay marriage.

“The first thing that I say is, ‘Please don’t let anybody try to get you to vote against your own best interests by feeding you messages of hate,'” she told an appreciative audience at the Beverly Hilton Hotel.

“And then I say, ‘You know, people used to say stuff like that about you and your love,'” – a reference to previous US legislation, now overturned, that banned interracial marriage.

The actress also called for “more LGBT representation in the media… more LGBT characters [and] more employment of LGBT people in front of and behind the camera.”

Emmerich, the openly gay director of Independence Day, received another special award at an event that also brought recognition for Transparent, the Amazon-produced series about a transgender parent.

The Imitation Game, about WWII code-breaker Alan Turing, received the outstanding film award, while legal drama How to Get Away with Murder was named outstanding drama series.

There was also recognition for musical TV series Glee, which Glaad said “consistently introduced groundbreaking LGBT characters and storylines” over the course of a six-year run that came to an end last week.