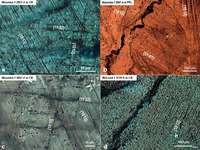 Scientists in Australia have discovered what they say is the largest asteroid impact area ever found.

The 400-kilometre (250-mile) wide area is buried deep in the earth’s crust and consists of two separate impact scars.

The team behind the discovery, from the Australian National University (ANU), said the asteroid broke into two before it hit, with each fragment more than 10km across.

The impact is thought to have occurred at least 300 million years ago.

The surface crater has long since disappeared from central Australia’s Warburton Basin but geophysical modelling below the surface found evidence of two massive impacts, said Dr Andrew Glikson, who led the ANU team.

“It would have been curtains for many life species on the planet at the time,” said Dr Glikson.

But the team, which published its findings in the geology journal Tectonophysics, has not been able to connect the impact to any known extinction.

“It’s a mystery – we can’t find an extinction event that matches these collisions,” said Dr Glikson. “I have a suspicion the impact could be older than 300 million years.”

The rocks around the impact zone are roughly 300 to 600 million years old, but a layer of ash that would have been thrown up by the impact has not been detected as sediment in rock layers from the same period.

The large meteorite believed to have killed the dinosaurs 66 million years ago corresponds to a layer of sediment in rocks around the world.

“Large impacts like these may have had a far more significant role in the Earth’s evolution than previously thought,” Dr Glikson said.

The apparent impact zone in the Warburton Basin was discovered by accident while scientists were drilling 2km under the Earth’s surface for a geothermal research project.

The dig returned traces of rock that had been turned to glass by extreme temperature and pressure, consistent with a massive impact.