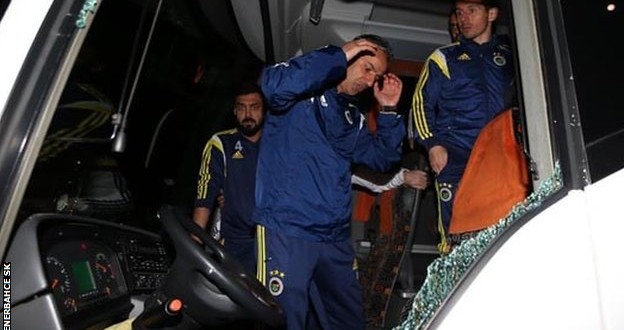 Fenerbahce’s team bus was shot at by a gunman after the Turkish Super Lig leaders’ 5-1 victory at Rizespor.

The driver was taken to hospital but no players suffered any injuries in the attack, which happened while they were travelling to Trabzon airport.

Prime Minister Ahmet Davutoglu says an investigation is under way.

The Turkish Football Federation condemned the attack and the club’s general secretary Mahmut Uslu said the incident was “very wrong”.

“We come here to do sport, we come to play football,” Uslu said.

The governor of Trabzon, which is in the north-east of Turkey, had initially said the bus appeared to have been hit by a stone but he later released a second statement, saying it seemed to have been a bullet.

Large crowds of Fenerbahce fans waited at Istanbul Airport to welcome the players back.

Turkish President Recep Tayyip Erdogan is a Fenerbahce supporter and reportedly called the local governor to inquire about the investigation into the incident.

Fenerbahce are the title holders and have won the competition 19 times, with former Premier League players Dirk Kuyt, Raul Meireles and Emre in their side.

The Istanbul-based team went top of the table after their victory on Saturday, one point ahead of bitter rivals Galatasaray.