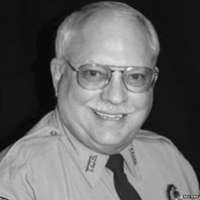 A white police officer who fatally shot a black man after apparently mistaking his gun for his Taser has been charged over the death.

A video filmed on 2 April in Tulsa shows Eric Harris, 44, chased and brought to ground before he is shot.

It follows a series of shootings of black men by white US police officers.

Mr Kunzweiler said the charges involved culpable negligence, which Oklahoma law defines as “the omission to do something which a reasonably careful person would do” or “lack of the usual ordinary care and caution”.

Prosecutors said Mr Bates had served as a reserve deputy, a volunteer position, since 2008.

The video of the shooting was released on the request of Mr Harris’s family after an investigation.

Mr Harris was accused of trying to sell an illegal gun to an undercover officer in a sting operation.

Mr Harris is heard calling out “He shot me, he shot me” and says he is losing his breath as he is pinned down.

Mr Harris was treated at the scene but died later in hospital.

A police investigator said Bates thought he drew a stun gun, not his gun.

For the second time in a week, a videotaped fatal shooting of a black man has provoked an outcry.

Last week Walter Scott, an unarmed 50-year-old, was shot in the back and killed in South Carolina.

The protests that followed that incident continued months of demonstrations about police use of force, ever since a black unarmed teenager was shot dead in Ferguson, Missouri, last summer.