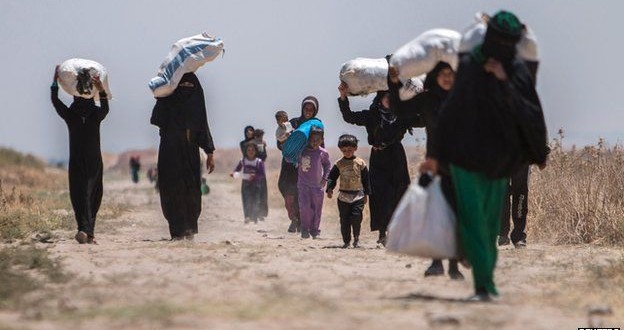 That amount is equivalent to the combined economies of Brazil, Canada, France, Germany, Spain and the United Kingdom, the report by the Institute for Economics and Peace (IEP) said.

The divide between the most peaceful and the least peaceful nations was deepening, the annual report added.

Iceland is the world’s most peaceful nation, whilst Syria is the least.

Libya saw the most severe deterioration over the course of 2014, according to the Australia-based IEP says.

The Middle East and North Africa now ranks as the world’s most violent region, overtaking South Asia which received that ranking for 2013.

Deaths caused by terrorism increased by 61% in 2013, the report said, with the loss of almost 18,000 lives – mostly in just five countries, Iraq, Afghanistan, Pakistan, Nigeria and Syria.

If the world decreased in violence by 10%, it would generate £1.43tn, says the IEP. This amount is equivalent to:

The most surprising finding, said IEP Chief Executive Steve Killelea, was the “inequality with peace” around the world.

He said some countries in Western Europe had now reached “quite historic levels of peace”, enjoying the lowest levels of murder rates and money spent on security “probably in the countries’ history”.

But Iraq, Syria, Nigeria, South Sudan and the Central African Republic had all become more violent in the past year, the report said.

The IEP said the total costs of conflict amounted to 13.4% of world GDP.

“Large increases in costs have occurred due to deaths from internal conflict, IDPs [internally displaced people] and refugee support, UN peacekeeping and GDP losses from conflict,” the report said.

The report also found that if global violence were to decrease by 10%, it would effectively give the world economy an additional $1.43 trillion – more than six times the amount needed to wipe out Greece’s debts, and three times more than the total earnings of some 1.1bn of the world’s poorest people.