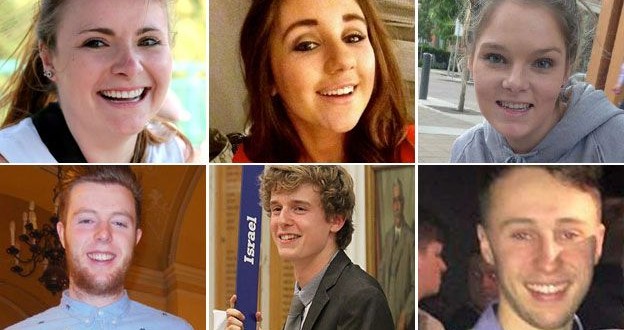 Families of Irish students who died and were injured after a balcony collapsed have been arriving in California.

The tragedy happened at a birthday party in an apartment in Berkeley.

Five of the six young people who died were from the Republic of Ireland, and some of them were students at University College Dublin (UCD).

Counsellors are in place to help families and friends of the bereaved and injured. An Irish university has expressed “heartbreak” at the deaths.

Those who were killed have been named as:

Several others have been injured, some of them very seriously.

Ms Donohoe, who had dual US-Irish citizenship, lived in California while the other five who died all had home addresses in the Republic of Ireland.

Mr Culligan and Mr Schuster were both past pupils of St Mary’s College in Rathmines, Dublin.

The majority of the victims were in the US on work visas, as part of the J1 USA summer work and travel programme.

The Irish Ministry for Foreign Affairs is working closely with families to offer practical support.

As an investigation gets under way, a number of factors are being looked at.

These include whether the balcony was built to code, if it was overloaded and if rain or other weather had weakened it.

Normal business at the Irish parliament was suspended on Wednesday as a mark of respect.

Prime Minister Enda Kenny led messages of condolences to the parents, families and friends of those affected by the tragedy while a minister has been dispatched to San Francisco to lead the consular response on the ground.

“We’ve all been shocked by the loss of life and injured,” Mr Kenny said.

“It is a terrible situation to have such a serious and sad incident to take place at the beginning of a summer’s activity and opportunity for so many young people on J1 visas in the US.”

Flags flew at half mast at Irish government buildings, at University College Dublin where three of the students studied and at the US embassy in Dublin.

Books of condolences were also opened by the university, with thousands of people signing online, while other books were being opened in the Mansion House in Dublin and in Cork and Galway.

Labour Party leader Joan Burton said: “Six families are heartbroken. Their children are wrenched away from them in the most dreadful of circumstances,” she said.

Micheál Martin, leader of the main opposition party Fianna Fáil, said everybody in Ireland was thinking of the grieving families.

Gerry Adams, Sinn Féin president, said it was “a dreadful stark reminder of the fragility of life”.

Meanwhile the New York Times is to review its coverage of the tragedy after complaints in Ireland.

An NYT article on social media referred to J1 students as being an embarrassment to Ireland at times.

“We understand and agree that some of the language in the piece could be interpreted as insensitive, particularly in such close proximity to this tragedy,” she said.

“It was never our intention to blame the victims and we apologise if the piece left that impression. We will continue to cover this story and report on the young people who lost their lives.”

Books of condolence for the victims have been opened at St Patrick’s Cathedral in Dublin and University College Cork.

UCD president Andrew Deeks expressed condolences to the victims’ families, saying: “We are heartbroken at their suffering and loss.”

St Mary’s College paid tribute to its past pupils.

“The thoughts and prayers of everybody in the St Mary’s community are with the families of Niccolai and Eoghan, as well as the other Irish youngsters named by the US authorities this evening,” it said in a statement.

Celine Kennelly of the Irish Immigration Pastoral Centre in California, said seven students were still in hospital and two of them were in a critical condition.

Fr Aidan McAleenan from St Columba’s Church in Oakland near Berkeley, who is originally from Banbridge, County Down, spent several hours with the injured and their friends.

“It was very emotional driving out and getting to the hospital and then having to tell some of them that another friend had died,” he told the BBC.

“It was really hard to know what to say or what to do. We prayed with them. Other people from the Irish community arrived – they are really devastated.”

US Ambassador to Ireland Kevin O’Malley said it was a “tragedy beyond belief”.

Lord Mayor of Dublin Christy Burke said it was a “very sad and tragic day”.