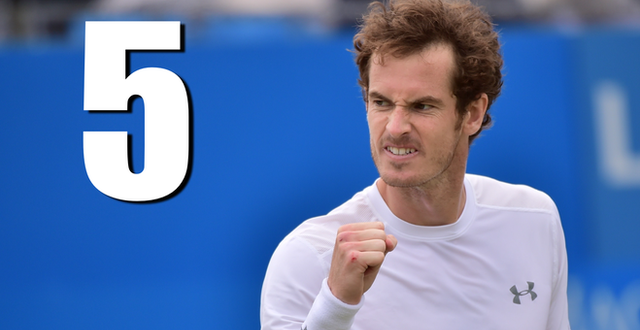 Andy Murray joined the likes of John McEnroe and Boris Becker as a four-time Queen’s Club champion with an impressive victory over Kevin Anderson.

The British number one played superbly to win 6-3 6-4 in just 64 minutes at the Aegon Championships in London.

“I played better as the week went on and hopefully I can continue that into Wimbledon,” the 28-year-old said.

“I tried to play each point and come up with some great shots. I had to play that way if I wanted to win today.”

The Scot also won the title in 2009, 2011 and 2013, and he will hope to repeat his effort of two years ago when he went on to make it a grass-court double at Wimbledon.

“It’s great preparation obviously, but I think it has only happened six times where someone has won Queen’s and gone on to win Wimbledon,” Murray added.

“There are no guarantees that winning here gives you a Wimbledon title.”

He can head to the All England Club in confident mood after dismantling the big-serving game of 6ft 8in Anderson.

Having resumed his semi-final against Troicki at 11:00 BST with the score at 3-3, the Briton wrapped that match up in a clinical 65 minutes and returned two hours later to face Anderson.

The South African, ranked 17th, had looked impregnable on serve as he made it through the draw but he found Murray’s returns just too testing.

Anderson made 78% of his first serves in the opening set but even that was not enough as Murray broke in game four, a brilliant backhand winner setting up the chance before Anderson netted a volley.

A forehand winner made it 4-1 after just 17 minutes, and a ferociously focused Murray pumped his fist before heading to his chair.

There was simply no let-up as he closed out the first set and proved similarly clinical when his chance arose in the second.

A clever finish at the net and a thumping forehand return opened the door at 2-2, and break point was converted with a lob followed by a drop shot that was verging on the cruel.

On he pressed, producing another beautiful lob and and a heavy backhand winner to move to the verge of victory.

A swinging serve out wide completed a masterful display and brought Murray his 34th career title, and his fourth at the venue where he claimed his first ATP match win 10 years ago.

“I need to train well the next five, six days, prepare as well as I can,” said Murray. “It gives me that little bit of confidence going in there.

“It’s been a really good start, but it’s a long way to go before Wimbledon even starts, and then all sorts of things can happen during Slams.”