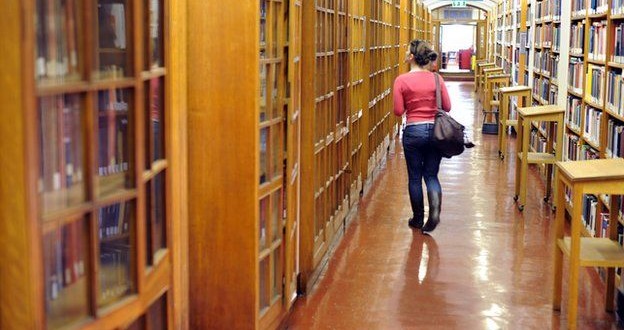 University ‘not good value’, say many

Four in 10 of the first students to pay higher fees do not believe their courses have been good value for money, a survey for BBC Radio 5 live suggests.

Just over half say their university course has been good value and about 8% are undecided.

The survey of 1,004 final-year students also shows 46% would do the same course again.

Universities UK said the last national student survey found 86% of students were satisfied with their course.

The survey, carried out by ComRes from 1-7 May, focused on undergraduates in their final year of degree courses in 2015.

These students were the first to pay higher fees of up to £9,000 per year, after the price of university tuition trebled in 2012.

Many commentators predicted there would be a fall in student numbers but this did not happen.

The survey found there were differences of opinion between students doing different types of courses.

Two-thirds of those studying science, technology, maths and engineering – subjects that require a lot of practical teaching and staff time – said their courses had been good value.

And 44% of humanities and social science students, which tend to receive less direct teaching time, said they felt their courses represented good value.

Elsewhere, one in eight students said they would still go to university if they had to make the decision again, but would study a different course – according to the survey.

Just 3% said they would not go at all.

Some 58% felt their courses had left them at least somewhat prepared for the future.

Nicola Dandridge, chief executive of Universities UK, said there was no evidence to suggest that the 2012 student funding reforms had deterred students from applying to university, and application rates were high.

She said: “The last national student survey reported that 86% of students were satisfied overall with their course. It shows that universities across the UK are responding to student feedback and working hard to improve the academic experience.

“The shift in England from public funding to increased fees means that students are understandably, and rightly, demanding more from their university courses. Universities are responding to this and are also improving the amount of information to students about courses to ensure that their experience matches their expectations.

“Degree holders also continue to earn considerably more than non-graduates over a working lifetime and employers are predicting a double-digit rise in graduate vacancies this year.”