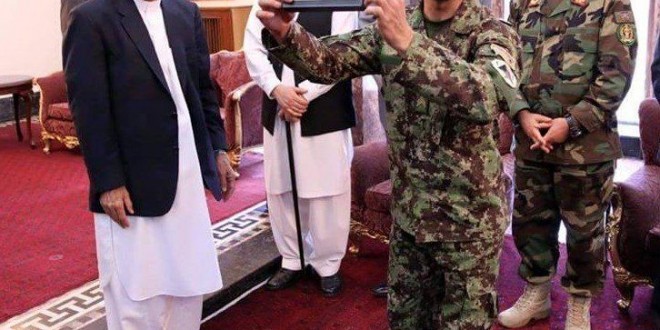 An Afghan soldier has been greeted as a hero and presented with keys to a new home for killing six of the seven insurgents who tried to storm parliament on Monday.

President Ashraf Ghani tweeted a picture of himself greeting the soldier, Esa Khan, at his office.

The soldier is also to be promoted and given a medal.

On Monday, TV stations showed Mr Khan standing over the bodies of the Taliban attackers after their failed attack.

The militants had detonated a suicide car bomb but failed to get into the parliamentary chamber.

“I just killed them,” said Mr Khan who has been lauded on Twitter.

“I was standing there and saw them running towards parliament.

“I shot one. I saw another coming. I shot six – all of them are dead.

“I would give my life for this country.”

At the time the interior ministry said the attack was repelled by police, with seven assailants killed.

Mr Ghani said he was proud of Mr Khan’s “resolve and heroism”.

The soldier’s commander, Gen Abdul Sattar, said Mr Khan had been very close to the suicide attack and shot the attackers with the assistance of colleagues at the scene.

He described Mr Khan – who belongs to the Pashtun majority from which the Taliban also draw their strength – as a hero for what he had done.

At least two civilians died in the militant attack and around 40 people were wounded.

The soldier alleged that Pakistan was behind the attack.

But the foreign ministry in Islamabad has issued a statement strongly condemning it and saying it is with Afghanistan “in our common struggle against terrorism”.

Meanwhile the Afghan army says it has recaptured a key northern district taken by the Taliban a few days ago.

Chardara district in Kunduz province lies just a few kilometres from the provincial capital, Kunduz city, and its airport, and the main road to Kabul runs through it.

The army’s commander of ground forces, Gen Morad Ali Morad, told Tolo News television he was speaking from the district and “most parts” of it had been retaken.

However a neighbouring district in the same province, Dasht-e-Archi, remains in rebel hands a day after they took it.