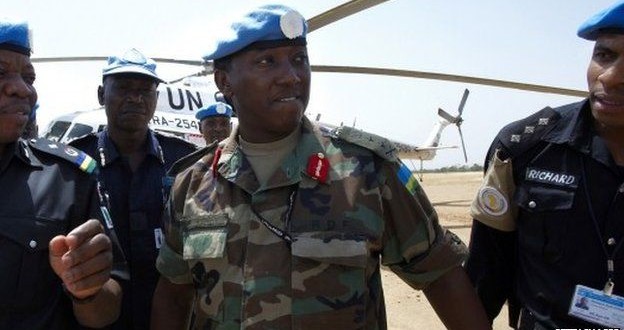 The Rwandan government has branded the arrest of its intelligence chief Karenzi Karake as “an outrage”.

Gen Karake, 54, was arrested at Heathrow Airport on Saturday, accused of ordering massacres in the wake of the 1994 Rwanda genocide.

He was arrested by Met police officers under the European Arrest Warrant on behalf of the Spanish authorities.

Williams Nkurunziza, Rwanda’s High Commissioner to the UK, said it was “an insult to our collective conscience”.

Prime Minister David Cameron’s official spokeswoman said it was an “operational matter” for the police who were legally obliged to act on valid European Arrest Warrants.

Andrew Mitchell, former international development secretary, said he believed the arrest was a “reprehensible abuse” of the law.

He is also accused of ordering the killing in 1997 of three Spanish nationals working for Medicos del Mundo.

But the Rwandan government is said to be puzzled by the timing of Gen Karake’s arrest, as he has travelled to the UK several times since the indictment was issued.

Mr Nkurunziza told the BBC World Service: “We take strong exception to the suggestion that he’s being arrested on war crimes.

“Any suggestion that any of our 40 leaders are guilty of crimes against humanity is an insult to our collective conscience.”

Gen Karake was remanded in custody after appearing at Westminster magistrates court and he will reappear on Thursday.

A spokesman for Spain’s National Court said it was now up to the British authorities to decide whether or not to extradite him.

Rwanda’s furious reaction to the arrest is typical.

Whenever it is criticised, especially in relation to reprisal killings of Hutus, it lashes out, accusing its critics of “genocide denial”.

In some ways, it seeks to exploit the collective international guilt arising from the world’s failure to stop the genocide of 1994.

Britain finds itself in a difficult position. It has been a close friend of Rwanda, praising the government of Paul Kagame for turning the country around and becoming one of Africa’s economic “success stories”.

However, the Kagame government comes down hard on dissent, stifles media freedom, and has been accused of meddling in conflicts across its borders.

Mr Mitchell told the BBC he thought the arrest was “completely wrong”.

“It’s being used by supporters of the genocidal regime against those who stopped the genocide.

“I think it is reprehensible that the European Arrest Warrant is being abused in this way by a junior Spanish judge,” he said. “It’s being used for political reasons and not judicial ones.”

He added that he agreed with American officials who have described the indictments as “un-researched, politically motivated and lacking in facts”.

Phil Clark, lecturer on Africa’s Great Lakes Region at the School of Oriental and African Studies in London, said there were concerns about the evidence in the Spanish indictment.

“There’s a sloppiness I think in much of the investigation that underpins this and even very critical human rights groups, that have tended not to be very friendly to Rwanda in the past, have raised questions about the quality of the Spanish arrest warrants.”

Gen Karake is director general of Rwanda’s National Intelligence and Security Services and a member of Rwandan Patriotic Front (RPF).

Nicknamed KK, the Rwandan government hail him as one of the people who stopped the genocide. He went on to be deputy commander of the country’s first UN peacekeeping mission in Darfur before returning to his role as spy chief.

During the genocide an estimated 800,000 people were killed between April and June 1994 by ethnic Hutu extremists.

Most of the dead were members of the minority Tutsi community and politically moderate Hutus.

The killings ended when the RPF, a Tutsi-led rebel movement that entered Rwanda from Uganda, seized control of the country.

But Human Rights Watch reported that in their drive for military victory and to control the population, the RPF killed thousands, including government troops, members of the militia and some civilians in numerous executions and massacres.

Phillip Gourevitch, a leading writer on Rwanda, told Newsnight that Gen Karake’s arrest was the equivalent of the head of the UK’s MI6 or the US’s CIA being arrested.

In a statement the British High Commission in Rwanda said the arrest was a “legal obligation” carried out on behalf of the Spanish authorities but stressed the UK had a “close relationship” with the Rwandan government.

“We co-operate closely on a growing range of regional and international issues,” the statement said.