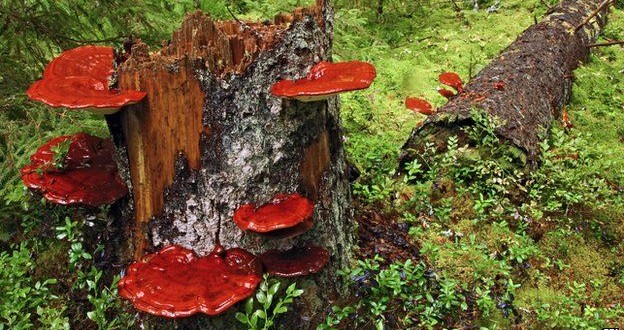 The researchers suggested the mushroom could eventually be used in the treatment of obesity.

Experts said the science was good, but putting mushroom extract in cans of cola would not help people lose weight.

G. lucidum has traditionally been sold for “health and longevity” say researchers at Chang Gung University.

They analysed the impact of the fungus on mice being fed a high-fat diet.

Those on just a high-fat diet reached 42g after their first two months whereas mice that were also fed a high dose of mushroom extract reached only 35g.

Mice were still much slimmer if they were fed a normal diet.

In their report, the team said mushroom extract “may be used as pre-biotics to reduce body weight gain, chronic inflammation and insulin resistance [type 2 diabetes] in obese individuals.”

Although this would, they said, need further testing in people.

The team in Taiwan showed that adding the mushroom to the mice’s meals altered the types of bacteria living in the gut.

Gut bugs are heavily involved in digestion and the release of energy, and some species are associated with slim people and others with fat people.

The scientists showed that transplanting faeces from the mushroom-fed mice to other mice – known as horizontal faeces transfer – helped the recipient keep off the pounds.

Prof Colin Hill, a microbiologist at University College Cork in Ireland, told the BBC News website: “I like the idea of some of these Chinese medicine stories coming back into science, I love the idea of revisiting traditional medicines.

“The microbiome is certainly a key player in weight gain and weight loss, it’s certainly involved in extracting energy from our food.

“But no intervention will overcome someone drinking lots of fizzy drinks, there won’t be a magic pill, no mushroom extract in a can of coke will help people lose weight.”