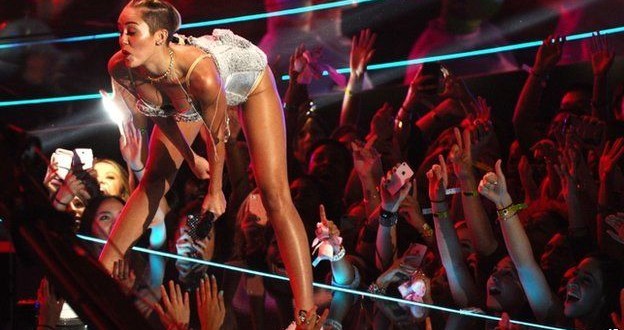 The word “twerk” – a dance move popularised by singer Miley Cyrus – actually dates back to 1820, according to the Oxford English Dictionary.

Researchers found the word, one of 500 new dictionary entries, was first used in 1820, spelt twirk, to refer to a twisting or jerking movement or twitch.

The verb is believed to have emerged later in 1848 and the twerk spelling was used by 1901, the dictionary says.

Cyrus performed the raunchy dance move at an MTV awards show in 2013.

The dictionary describes twerking as dancing “in a sexually provocative manner, using thrusting movements of the bottom and hips while in a low, squatting stance”.

It says the word in its current form has its roots in the early 1990s New Orleans “bounce” music scene, but the exact origin of twerk is uncertain.

Twerk may have been a blend of the words twist or twitch and jerk, the dictionary says.

Fiona McPherson, senior editor of Oxford English Dictionary, said: “We are confident that it is the same origins as the dance.

“There has been constant use up into the present day to mean that same thing. I think it’s quite spectacular, the early origins for it. We were quite surprised.”

Guerrilla – describing activities carried out in an irregular and spontaneous way

Gimmick – to mean “a night out with friends”.

The Oxford English Dictionary records the meaning and development of the English language.

For a word to qualify, it must have been in popular use for at least 10 years in both novels and newspapers.

Twerking first entered the Oxford Dictionary of English, which recognises popular usage of words, in 2013.

“Meh”, an interjection expressing lack of enthusiasm, has also been included in the Oxford English Dictionary.

The word is believed to have been first used in 1992, before being popularised by cult TV cartoon The Simpsons.

Ms McPherson said the new entries had “earned their place” in the history of the English language.