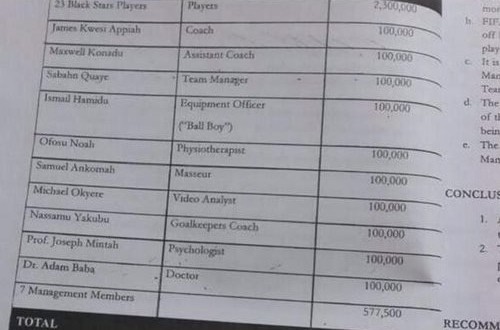 Consider a world in which the England kit man is paid as big an appearance fee as Wayne Rooney, Joe Hart or Raheem Sterling.

In a 396-page report which investigates the Black Stars’ first-round exit in Brazil, payment for a role also defined as “ball boy” is highlighted.

Ismail Hamidu was the lucky recipient of a sum equal to that earned by individual players, doctors, coaches and manager James Kwesi Appiah.

His beat was not enough to help the team beat Portugal in their final group fixture to reach the second round, a match which followed the

out to South America to settle a pay dispute with players.

Two sentences in the Dzamefe Report that perhaps sum up the frustrations and difficulties of Ghana’s World Cup campaign are:

The report aims to unpick myriad financial issues surrounding Ghana’s World Cup campaign, including some payments which could not be verified or accounted for.

The African side received $8m (£5m) for their group-stage exit, but spent almost $4m more than that on their campaign from the beginning of qualifying.