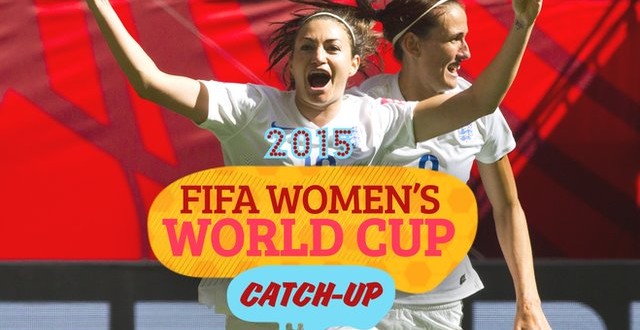 England’s women have matched their male counterparts from 1966 and 1990 by reaching the semi-finals of the Women’s World Cup, says manager Mark Sampson.

to progress to the last four of the tournament for the first time.

“They are history-makers again, the third ever England team to get to a semi-final,” said Sampson.

‘We have reached new levels’

Sampson described the atmosphere as like a “cauldron” against host nation Canada at the BC Place Stadium in Vancouver.

His side took the lead through a Jodie Taylor shot and Lucy Bronze header as they scored two goals in three minutes.

England goalkeeper Karen Bardsley’s fumble allowed Christine Sinclair to pull one back for Canada but they failed to engineer an equaliser as a resolute England stood firm.

“What a show of resilience and character from the team,” added Sampson.

“They have shown a desire I’ve never seen from an England team before to hang on in there and get us through to the next round.

“We didn’t play much football and Canada were outstanding. But this team just won’t give in. We had to get to levels we have never been to before.”

England will now play holders Japan in the semi-final in a game that will be live on BBC One from 23:40 BST on Wednesday, 1 July.

“We got ourselves through and I could not be prouder,” said Sampson. “Every player ran through brick walls for this team. I don’t know where this team found their energy.

Japan are the reigning champions, beating the USA in the final in 2011, although

England did beat them in a group game

in that tournament in Germany.

“Bring them on,” said Sampson.

England had 37.3% possession against Canada but still came out on top

hopes the win will help the women’s game in England.

“It was 55,000 people inside the stadium against 23 players and staff,” she said. “We fought for the shirt to the very end.

“It is a massive thing for English football. The women’s game is changing and we knew this was a history-making game.

“We want to inspire a nation, inspire young girls to go and play football. We hope they were allowed to stay up and watch us!”

is English and was tipped to take the England job before Mark Sampson was appointed 18 months ago.

“We’ve given you our best but it just wasn’t good enough,” he told Canadians in an emotional on-pitch interview. “We wanted to go all the way.

“We are absolutely gutted. We made mistakes, they caught us on a set-play and an error. I don’t think anyone hid from the responsibility.

“I want to thank everyone who supported us. I can’t believe it ended like this.”

“We call Mark Sampson the tinkerman and all of his tactics have been spot on. England need to keep believing.

“There is no reason why they can’t go on and beat Japan. Yes, they are a fantastic team and play unbelievable football but so can England now.”

“Who said that England were the weakest team left in the competition at the quarter-final stage???? Err I think not!”