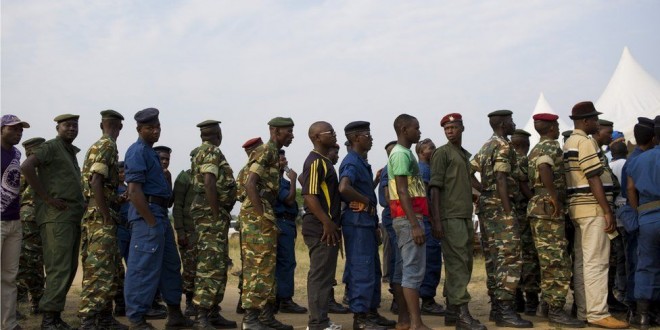 A grenade was thrown at a polling station at the start of Burundi’s parliamentary election, witnesses say.

Elections were held despite an opposition boycott and weeks of protests over President Pierre Nkurunziza’s plan to seek a third term.

Electoral commission spokesman Prosper Ntahorwamiye told the BBC that he was unaware of any incidents.

The African Union (AU) has not sent observers – the first time it has taken such a stance against a member state.

Presidential elections are due next month.

Gunfire has been heard nightly in the capital, Bujumbura, and scores of people have been killed in unrest since a failed coup attempt last month.

Several polling stations have been attacked in the capital and in the provinces, according to police officials quoted by the AFP news agency on Monday.

One resident in the Kinindo district of the capital told the BBC’s Maud Jullien that there had been gunfire and he was too scared to venture out.

Witnesses told her the grenade was thrown at 0800 local time (0600 GMT) in Musaga where support for the opposition is strong.

Voters queued up in several neighbourhoods seen as ruling party strongholds, while in many others, where there have been months of protests against the president’s bid for a third term in office, almost no-one showed up to vote.

What’s behind the coup bid?

The electoral commission spokesman said the vote was going smoothly.

Presidential spokesperson Gervais Abayeho rejected the notion that the country was not in a position to hold elections, telling the BBC’s Focus on Africa radio:

“Bujumbura is not the whole of Burundi – Bujumbura is a small portion of the country. The whole country is peaceful, except perhaps those areas where explosions or gunshots have been reported,” he said.

The AU said conditions for a free and fair vote have not been met.

The European Union has also withdrawn its election observers, saying the lack of basic conditions to ensure the vote’s credibility would only worsen the crisis in the country.

The AU and the UN had called for the parliamentary election to be postponed. But the government rejected the demands, saying conditions were stable enough for a vote, while a delay could create a dangerous political vacuum.

The presidential election was due in June but was put back to 15 July after pressure from regional leaders.

Many in Bujumbura say the unrest has prevented them from registering to vote, adding that they feel the outcome of the process is already known.

Several leading opposition parties have said they will boycott the election.

On Sunday, the speaker of parliament, Pie Ntavyohanyuma, said he had left the country because he feared he would be killed.

Tensions in Burundi have forced more than 100,000 people to flee this year.

The opposition says Mr Nkurunziza’s attempt to run for office again contravenes the constitution, which states a president can only serve two terms.

But Mr Nkurunziza’s supporters argue that he is entitled to another term because he was first elected by parliament in 2005 – not voters. The Constitutional Court ruled in favour of the president.

Some 3.8 million Burundians are eligible to vote.