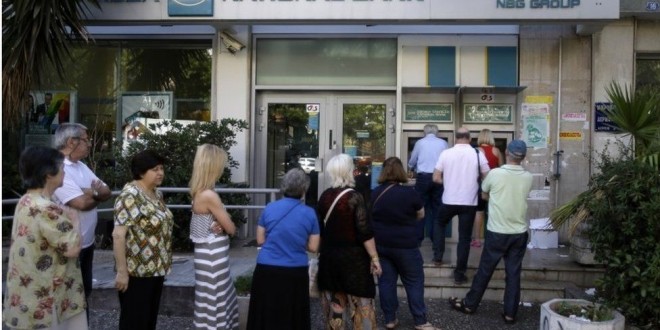 The Greek government is in last-minute talks over whether to accept an offer that would let Greece repay part of its debt, local media say.

Greece is hours away from a deadline to repay a €1.6bn (£1.1bn) loan to the International Monetary Fund (IMF) – one it may miss.

The European Commission (EC), said it made a last-minute proposal of reforms on Monday.

If Athens accepts the deal, it will free up cash to repay the €1.6bn.

Mr Juncker then offered Greece the latest deal, with a midnight deadline. That has since expired.

However, Greek media say the government is still in talks over the offer.

The national broadcaster, ERT, said on Tuesday morning that discussions about the proposals were taking place “at the highest level” in Athens.

Greece’s chief negotiator with its creditors, Euclid Tsakalotos, told the BBC’s Europe editor Katya Adler he expected more proposals to be made.

But German Chancellor Angela Merkel has played down any hopes of a last-minute deal, saying she was not aware of any new offer from the EC.

“This evening at exactly midnight central European time the programme expires. And I am not aware of any real indications of anything else,” she told reporters.

Long queues of people are continuing to snake from many cash machines in Greece, with withdrawals capped at just €60 a day.

Up to 1,000 bank branches will re-open from Wednesday to allow pensioners – many of whom do not use bank cards – to withdraw up to €120.

The EC says the deal offered by Mr Juncker on Monday was identical to one made on Friday.

However, reports in Greece say the new offer is different to Friday’s, and includes a change in terms to Ekas – a top-up given to poorer Greek pensioners.

Athens does not want it scrapped before 2020, but Europe wants it phased out earlier.

European Commission spokesman Margaritis Schinas said: “There may be still margins or not for further discussions.”

Talks between Greece and its creditors broke down last week, leading to Greek banks having to shut this week.

A referendum is due to take place in Greece on Sunday over whether the country should accept the creditors’ proposals.

EU leaders have warned that a rejection of the proposals would mean Greece leaving the eurozone – though Mr Tsipras says he does not want this to happen.

The EC says that if funds were to be released, Mr Tsipras and his party must back the “yes” vote in the referendum.

What will happen next?

5 July – the referendum on creditors’ proposals, and many say Greece’s membership of the eurozone, takes place

20 July – Greece must redeem €3.46bn of bonds held by the European Central Bank. If it fails to do so, the ECB can cut off Greece’s access to emergency loans.

Speaking live on state TV on Monday evening, Mr Tsipras appealed to Greeks to reject the creditors’ proposals, saying this would give Greece “more powerful weapons” to take to the negotiating table.

Mr Tsipras also hinted strongly that he would resign if the result of the referendum was a “yes” vote.

“If the Greek people want to proceed with austerity plans in perpetuity, which will leave us unable to lift our head… we will respect it, but we will not be the ones to carry it out,” he said.

Some eurozone leaders, including the Italian prime minister and French president, voiced their concern on Monday that Greek voters would effectively be deciding next Sunday whether or not they wanted to stay in the eurozone.

Meanwhile, European Commission President Jean-Claude Juncker said he felt betrayed by the Tsipras-led government and called on Greek voters to oppose him.

A guide to the key numbers and issues

Greece’s government has already been forced to order all banks to be closed until 6 July after the European Central Bank (ECB) decided not to extend its emergency funding.

The ECB is believed to have disbursed virtually all of its emergency funds for Greece, amounting to €89bn (£63bn).

Are you in Greece? What are your concerns? Do you have friends and family in the country who may be affected? Email [email protected] with your experiences.