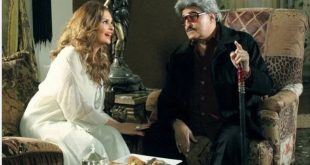 Jerry Weintraub – one of Hollywood’s most famous producers – has died aged 77, US media report.

They say the man behind the Karate Kid and Ocean’s Eleven films passed away in Santa Barbara, California, with his family at his side. The cause of his death was not immediately known.

Weintraub started his career in the music industry and later moved into film production.

He founded his own production company, but then began working for Warner Bros.

“In the coming days there will be tributes. We’ll laugh at his great stories, and applaud his accomplishments,” the actor was quoted as saying by the Hollywood Reporter.

“And in the years to come, the stories and accomplishments will get better with age, just as Jerry would have wanted it. But not today. Today our friend died.”

In a statement, former US President George HW Bush said: “Jerry was an American original, who earned his success by the sheer force of his instinct, drive, and larger-than-life personality. He had a passion for life.

“And throughout the ups and downs of his prolific career it was clear just how much he loved show business.”

Weintraub began his career as a music producer and spent more than 20 years promoting tours for stars such as Elvis Presley and Frank Sinatra.

His foray into the film industry began in the 1970s after meeting director Robert Altman. This resulted in the production of Nashville in 1975.