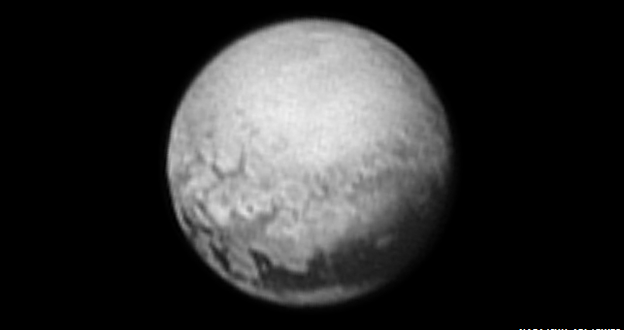 As New Horizons bears down on Pluto, its images just get sharper and sharper.

The probe’s latest picture released on Saturday has started to give scientists some real indications of the geology on the dwarf world.

The new black-and-white view reveals a vast band of patterned terrain stretching around the globe for roughly 1,500km.

Nasa’s spacecraft is due to flyby the distant mini-planet on Tuesday.

At that point, its telescopic camera, Lorri, will be acquiring images at a resolution that is better than 100m per pixel.

But for the moment, features still have a rather blurred look about them.

This latest shot from Lorri was taken on Thursday when New Horizons was still 5.4 million km from its target.

At this distance, the resolution is 27km per pixel. Nonetheless, even at this range, there is plenty to excite the geologists.

You can still see just below the patterned band the very dark terrain that scientists have dubbed “the whale”. Not visible anymore, however, is the very bright region that looked like a heart in earlier images. This has rotated out of view.

It will, though, come back around, and will be the face of the 2,300km-wide world that is presented to New Horizons at closest approach.

“Among the structures tentatively identified in this new image are what appear to be polygonal features; a complex band of terrain stretching east-northeast across the planet, approximately 1,000 miles long; and a complex region where bright terrains meet the dark terrains of the whale,” said New Horizons principal investigator Alan Stern.

New Horizons was launched from Earth in 2006. It is set to gather hundreds of pictures and other types of research data as it sweeps past Pluto and its five moons: Charon, Styx, Nix, Kerberos and Hydra.

The probe’s difficulty is getting all that information back to Earth. The distance to the dwarf is vast – more than 4.7 billion km – and this makes for very low bit rates.

The mission team expects it to take 16 months to return all the science to be acquired over the coming week.