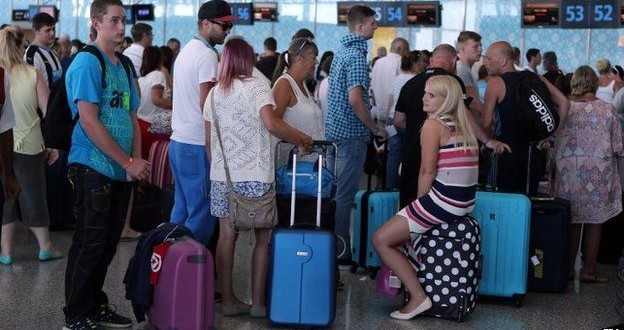 More UK holidaymakers are flying home from Tunisia after the government advised them to leave the country amid fears of another terror attack.

Thomas Cook and Monarch Airlines expect to fly more than 2,000 people home over the weekend.

Tunisia declared a state of emergency after 38 people – including 30 Britons – were killed by an Islamist gunman on a beach in Sousse on 26 June.

The Tunisian government said it had done everything it could to protect foreigners.

Extra flights are being laid on across the weekend to evacuate thousands of British package holidaymakers and hundreds of independent travellers.

Saturday’s flights are landing at Gatwick, Bristol, Stansted and Manchester.

Monarch Airlines, which is also flying UK tourists back from Enfidha Airport, north of Sousse, said:

Thomas Cook and Monarch said their final flights would leave on Sunday morning to Glasgow, Gatwick and Manchester.

They have cancelled all further bookings to Tunisia for the rest of the summer season.

What next for Tunisia holidaymakers?

The BBC’s Jim Muir, at Enfidha Airport, said there was anger among British tourists who felt the decision had been taken suddenly and was not justified.

“They’re angry at the British authorities for suddenly springing this surprise two weeks after the attack on Sousse – and they’re angry that their tour operators are taking this advisory as an instruction and practically ordering them out,” he said.

Sara Southall, from Staffordshire, said the Foreign Office should have changed its travel advice sooner.

“If they were still investigating, I think they should have stopped everyone from travelling until they knew it was safe rather than sending us out here and then sending us back,” she said.

“But obviously, if the decision’s been made, I imagine there’s a reason why, and I’d rather be safe.”

Myles Roberts said: “[I’m] very, very disappointed. When I left England on Wednesday there were no problems whatsoever… It’s been made quite clear to us that if we don’t leave on these flights we could be stuck here until October.”

Mr Blunt questioned why travel advice was not changed immediately after the attack.

“What we don’t know is the exact intelligence picture of what Philip Hammond (the foreign secretary) is seeing – but on the basis of what he’s said it raises questions,” he told BBC Radio 4’s Today programme.

Mr Blunt said he intended to question Mr Hammond about the decision when he appears before the committee on 21 July.

Asked if he would be prepared to take his family on holiday to Tunisia, the former minister answered: “Yes.”

The UK has warned another terror attack in the country was “highly likely”.

Mr Hammond said it was “too big a risk” not to act but he hoped the guidance would be downgraded soon.

Ireland, where three of the victims were from, has warned against “all non-essential travel” to Tunisia. Denmark followed suit but Germany and France, which accounts for the largest number of tourists in the country, has not.

The Sousse gunman has been identified as Seifeddine Rezgui, who authorities say had trained in Libya – but the Islamic State group claimed the attack.

Are you a British national in Tunisia? Are you following the FCO’s travel advice? Send your comments to [email protected].

If you are available to speak to a BBC journalist, please include a contact telephone number.